Hargraves' drawings of the spinning jenny as specified in his patent. 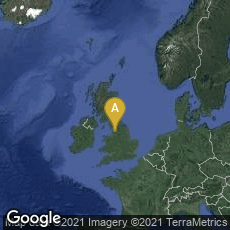 James Hargreaves Invents the Spinning Jenny, a Major Step in the Industrial Revolution A Spinning Jenny spinning machine which initiated the Industrial Revolution. Model from the Museum für Frühindustrialisierung (Museum of Early Industrialization) in Wuppertal, Germany.

"The idea was developed by Hargreaves as a metal frame with eight wooden spindles at one end. A set of eight rovings was attached to a beam on that frame. The rovings when extended passed through two horizontal bars of wood that could be clasped together. These bars could be drawn along the top of the frame by the spinner's left hand thus extending the thread. The spinner used his right hand to rapidly turn a wheel which caused all the spindles to revolve, and the thread to be spun. When the bars were returned, the thread wound onto the spindle. A pressing wire (faller) was used to guide the threads onto the right place on the spindle" (Wikipedia article Spinning Jenny, accessed 02-28-2016).

For his invention Hargreaves received British patent No. 962 in 1770. In the specification Hargreaves's name was spelled Hargraves. The text of specification was unusually brief, chiefly to explain the accompanying detailed schematic drawing. By 1770 the machine could, as stated in the patent and shown in the drawing, spin 16 or more threads at one time:

"A Method of Making a Wheel or Engine of an entire New Construction (and never before made Use of), in order for Spinning, Drawing, and Twisting of Cotton and to be managed by One Person only, and that the Wheel or Engine will Spin, Draw, and Twist Sixteen or more Threads at One Time by a Turn or Motion of One Hand a Draw of the other."