Grotius's edition of the Aratea codex is considered the first printed facsimile of a medieval manuscript. 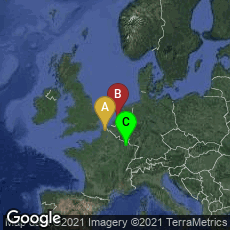 The Leiden Aratea (Leiden, Universiteitsbibliotheek, VLQ 79), an illuminated astronomical manuscript, was written and illuminated in Lorraine around 816 CE. It is a copy of a Latin translation from the Greek by the Roman general Claudius Caesar Germanicus (15 BCE - 19 CE), based on the Phaenomena (Φαινόμενα "Appearances") by the Greek didactic poet Aratus of Soli ( Ἄρᾱτος ὁ Σολεύς; circa 315-310 BCE – 240 BCE). The text was supplemented by portions of a second Latin version of Aratus's poem, written by Rufius Festus Avienus in the fourth century CE.

"The Phaenomena appears to be based on two prose works—Phaenomena and Enoptron (Ἔνοπτρον "Mirror", presumably a descriptive image of the heavens)—by Eudoxus of Cnidus, written about a century earlier. We are told by the biographers of Aratus that it was the desire of Antigonus to have them turned into verse, which gave rise to the Phaenomena of Aratus; and it appears from the fragments of them preserved by Hipparchus, that Aratus has in fact versified, or closely imitated parts of them both, but especially of the first.

"The purpose of the Phaenomena is to give an introduction to the constellations, with the rules for their risings and settings; and of the circles of the sphere, amongst which the Milky Way is reckoned. The positions of the constellations, north of the ecliptic, are described by reference to the principal groups surrounding the north pole (Ursa Major, Ursa Minor, Draco, and Cepheus), whilst Orion serves as a point of departure for those to the south. The immobility of the earth, and the revolution of the sky about a fixed axis are maintained; the path of the sun in the zodiac is described; but the planets are introduced merely as bodies having a motion of their own, without any attempt to define their periods; nor is anything said about the moon's orbit. The opening of the poem asserts the dependence of all things upon Zeus. From the lack of precision in the descriptions, it would seem that Aratus was neither a mathematician nor observer or, at any rate, that in this work he did not aim at scientific accuracy. He not only represents the configurations of particular groups incorrectly, but describes some phenomena which are inconsistent with any one supposed latitude of the spectator, and others which could not coexist at any one epoch. These errors are partly to be attributed to Eudoxus himself, and partly to the way in which Aratus has used the materials supplied by him. Hipparchus (about a century later), who was a scientific astronomer and observer, has left a commentary upon the Phaenomena of Eudoxus and Aratus, accompanied by the discrepancies which he had noticed between his own observations and their descriptions (Wikipedia article on Aratus, accessed 01-15-2016).

The 99 extant folios (225 x 200 mm) in the Leiden Aratea include 35 full-page miniatures, at least 4 of which are missing. The illustrations include some of the earliest artistic depictions of the constellations as known by the Greeks; however, the artist of the Leiden manuscript made no effort to place the stars accurately according to their positions in the sky, so the images cannot be considered true star charts. These images are presumed to be copies of miniatures made for a Late Antique manuscript, probably written in the mid-fourth or fifth century, and now lost. Written in narrow rustic capitals, the manuscript preserves the writting style and the squarish page format of the Late Antique, and its miniatures, framed as though they were independent paintings, reflect conventions developed in antiquity. Katzenstein suggests that the opening verses of the Leiden Aratea, in which Germanicus presents his work to a member of the imperial family of ancient Rome, may indicate that this copy was originally made for a member of the ruling Carolingian family (perhaps Judith, the second wife of Louis the Pious, son of Charlemagne). She also suggests (p. 7) that the manuscript was "almost certainly in northern France, at the monastery of Saint-Bertin at Saint-Omer, by at least the early eleventh century, when it served as a basis of another manuscript of Aratus' poem now in the Bibliothèque Municipale in Boulogne."

Jacob Susius (Suys), Lord of Grysenoordt, about whom I have found little information, acquired the manuscript in Ghent in 1573, according to the Wikipedia. In 1600 the age of only 17, the young and apparently precocious, Hugo Grotius (1583-1645), who later became a founder of international law, used the manuscript as a basis for his remarkable Greek and Latin extensively annotated edition entitled Syntagma Arateorum: Opus poeticae et astronomiae studiosis utilissimum published in Leiden by Christoph van Ravelingen (Raphelengius). Grotius's edition, which reproduced all of the images in the Leiden Aratea as black & white engravings by Jacques de Gheyn II (1565-1629), with letterpress renditions of the Latin text of the manuscript on facing pages, is considered the first printed facsimile edition of an illuminated manuscript. In his edition Grotius included the Greek text of Aratus, Cicero's Aratea with the lacunae supplied in the same meter by Grotius. Following his reproduction of the Carolingian / Late Antique style manuscript Grotius published an elaborate apparatus criticus with notes in Latin, Hebrew and Arabic. He was, however, vague in his citations of previous printed editions or manuscripts that he used. One of the more significant of the Greek texts of Aratus, possibly used by Grotius, is the 14th century Codex Palatinus Graecus 40 at Heidelberg University. In January 2016 the relevant portion of this codex was available in digital facsimile at this link. In January 2016 a digital facsimile of Grotius's 1600 edition was available from Google Books at this link.

The Leiden Aratea was later in the library of Christina, Queen of Sweden, after which it came into the possession of her librarian, the Dutch scholar and manuscript collector Isaac Vossius (1618-89). It was acquired by Leiden University Library as part of their acquisition of Vossius's library in 1690. A scholarly account of the manuscript, The Leiden Aratea: Ancient Constellations in a Medieval Manuscript by Ranee Katzenstein and Emile Savage-Smith, was published by the J. Paul Getty Museum in 1988. In January 2016 this was available online from the Getty Museum at this link.

Aratus's Phaenomena was among the earliest astronomical works to be published in print. It was first issued along with Manilius's Astonomicon by Ugo Rugerius and Doninus Bertochus of Bologna on March 20, 1474 (ISTC No. im00203000); the last edition printed in the 15th century was in Aldus Manutius's edition of a collection of classical works on astronomy issued in Venice, 1499 (ISTC No. if00191000).