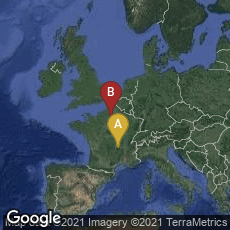 Jean Imberdis Publishes First Book on the Manufacture of Paper Image Source: babel.hathitrust.org
Title page of Imberdis's work, the first separate book on the manufacture of paper. This is a digital facsimile of the reproduction of the title page from the 1899 edition.

In 1693 Jean Imberdis (b. 1667) a Jesuit, issued the first book on the manufacture of paper, entitled Papyrus sive ars confiendae papyri from Cleremont, at the press of Damian Boujon. The work, which was written in the form of a didactic poem, was issued anonymously, as a tribute to the primary industry in Imberdis's native town of Ambert, home of several paper mills. When the Paper Publications Society issued the first English translation in 1952 they indicated that the original printing survived in only a single copy. However, they did not identify the location of that copy, and when I wrote this note in February 2016 it was unclear whether the single original printed copy remained extant. The Latin text is best known from the facsimile of the Latin edition with French translation published by August Blanchet in 1899. The text was translated into German by Wilhelm Niemeyer and sumptuously issued by Armin Renker in 1944/45.

The model of Imberdis's poem of 486 hexameter lines, was Virgil's Georgics, on which virtually all similar didactic poems had been modeled since the Middle Ages. The technical subject matter presented a great challenge to the poet who could not always express the details in elegant verses. The first English translation was prepared by Eric Laughton and beautifully issued as Papyrus, or the Craft of Paper, with a detailed subject index, by the Paper Publications Society of Hilversum, Holland in 1952. The edition was limited to 200 numbered copies on handmade paper by J. Barcham Green.