Image Source: www.jstor.org
Drawing of Arkwright's spinning machine reproduced from Richard L. Hills, "Sir Richard Arkwright and His Patent Granted in 1769," Notes and Records of the Royal Society of London, 24 (1970) 258.. Model of a water frame in the Historical Museum in Wuppertal. 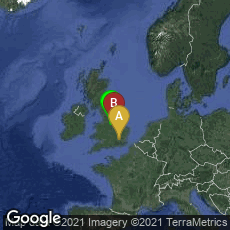 Large folio mezzotint engraved by I. R. Smith of the portrait of Richard Arkwright by Joseph Wright of Derby, 1801. This copy is on an untrimmed sheet.

In 1769 English inventor and entrepreneur Richard Arkwright of Nottingham received British patent No. 931 entitled "A new Piece of Machinery never before found out, practised, or used, for the Making of Weft or Yarn from Cotton, Flax, and Wool, which would be of great Utility to a great many Manufacturers in this His Kingdom of England, be well as to His Subjects in general, by Employing a Number of Poor People in Working the said Machinery, and Making the said Weft or Yarn much Superior in Quality to any ever hertofore Manufactured or Made."

Arkwright's description of his invention in his patent specification, referring to the associated diagrams, was brief, and unillustrated:

"A, the cogg wheel and shaft, which receive their motion from a horse; B, the drum or wheel which turns C, a belt of leather, and give motion to the whole machine; D, a lead weight which keeps F., the small drum, steady to E, the forcing wheel; G, the shaft of wood which gives motion to the wheel H, and continues it to I, four pair of rollers (the form of which are drawn in the margin), which act by tooth and pinion, made of brass and steel nutts, fixt in two iron plates K. That part of the roller which the cotton runs through is covered with wood, the top roller with leather, and the bottom one fluted, which lets the cotton &c. through it, and by one pair of rollers moving quicker than the other, draws it finer for twisting, which is performed by the spindles T. K, the two iron plates described abpve; L, four large bobbins with cotton rovings on, conducted between rollers at the back; M, the four threads carried to the bobbins and spindles, by four small wires fixt across the frame in the slip of wood V; N, iron leavers with small lead weights, hanging to the rollers by pulleys, which keep the rollers close to each other; O, a cross piece of wood to which the leavers are fixed; P, the bobbins and spindles; Q, flyes made of wood, with small wires on the side which lead the thread to the bobbins; R, small worsted bands, put about the whirl of the bobbins, the screwing of which tight or easy causes the bobbins to wind up the thread faster or slower; S, the four whirls of the spindles; T, the four spindles which run in iron plates V, explained in letter M; W, a wooden frame of the whole machine."

Two years after receipt of his first patent, in 1771 Arkwright built Cromford Mill, in Cromford, Derbyshire — the first water-powered cotton spinning mill, which laid the foundation for his fortune, and was quickly copied by mills in Lancashire, Germany and the United States. In his concept for a mechanized cotton spinning mill Arkwright had been precursed by Thomas Lombe, whose silk-throwing mill built on an island in the river Derwent in the second decade of the 18th century, had been the first factory.

Arkwright received a second patent (No. 1111) in 1775 for "Certain Instruments or Machines which would be of publick Utlity in Preparing Silk, Cotton, Flax, and Wool, for Spinning, and constructed on easy and simple Principles very different from any that had ever been contrived." This patent, an expansion of Arkwright's first patent of 1769, was illustrated with diagrams of the machine. The machine, known as a spinning frame, was originally intended to be operated by "horse" power. When Arkwright applied water power to the machinery it became known as the water frame.

Arkwright's hydraulic spinning machine was one of the first developments of mass production, which eventually caused disruptive economic and social changes characteristic of the Industrial Revolution. "In 1771, Arkwright installed the water frame in his cotton mill at Cromford, Derbyshire, on the River Derwent, creating one of the first factories that was specifically built to house machinery rather than just bringing workers together. It was one of the first instances of the working day being determined by the clock instead of the daylight hours, of people being employed rather than just contracted. In its final form, combined with his carding machine, it was the first factory to use a continuous process from raw material to finished product in a series of operations.[4]" (Wikipedia article on Water Frame)

In Cromford there were not enough local people to supply Arkwright with the workers he needed. After building a large number of cottages close to the factory, he imported workers from all over Derbyshire. Arkwright preferred weavers with large families so that while the women and children worked in his spinning-factory the weavers (adult males) worked at home turning the yarn into cloth.

"The Derby Mercury reported on 22nd October 1779 that Arkwright feared that people made unemployed by his new methods might destroy his factory: 'There is some fear of the mob coming to destroy the works at Cromford, but they are well prepared to receive them should they come here. All the gentlemen in this neighbourhood being determined to defend the works, which have been of such utility to this country. 5,000 or 6,000 men can be at any time assembled in less than an hour by signals agreed upon, who are determined to defend to the very last extremity, the works, by which many hundreds of their wives and children get a decent and comfortable livelihood' " (http://www.spartacus.schoolnet.co.uk/IRarkwright.htm, accessed 01-30-2012).