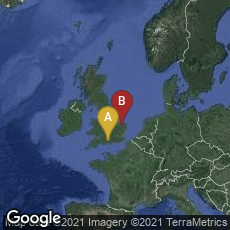 In 1805 papermaker Jean Abbot Dusautoy, operator of the Lying Paper Mill near East Dereham, Norfolk issued from Romsey The Paper-Maker's Ready Reckoner, or Calculations to Shew the Prime Cost of Writing or Printing Paper.... Dusautoy's mill had been operated as both a paper and flour mill since the early sixteenth-century. Dusautoy’s Ready Reckoner was compiled from the author’s experience, and was published to assist other paper makers just as the first papermaking machines began to be introduced. Not only do the tables show calculations for the prime cost of rags per ream, but also the expenses for the paper maker: rent, taxes, insurance, repairs, wages, interest, fuel, candles, stable expenses, travelling, utensils (felts, moulds planes, boards and levers), bad debts, oil, lard, soap, flannel, packing paper, various kinds of stationery and finally customs duty. The last table is for calculating the wages of the journeymen paper makers on either a fixed weekly wage or by piece work, suggesting that the cost of labor may not have been the first concern of traditional hand papermakers at this time.

Dusatoy's Ready Reckoner, published at the exhorbitant cost of five guineas per copy, was intended to be sold to other papermakers. My copy is signed by the author at the end of the explanation and numbered No. 112. Only a few copies would been sold, which would explain why very few copies survived. COPAC locates copies at the British Library, Edinburgh University and Glasgow University. OCLC adds a copy in the Netherlands; no copies in American libraries are recorded.

The papermaking machine patents by Louis-Nicolas Robert, John Gamble, the Fourdriniers and others make it clear that the objectives of the inventors of papermaking machinery aimed to produce paper in larger format than could be made by hand, as well as to lower cost, and speed up production. Dusatoy's Ready-Reckoner could have assisted them in calculating cost savings from mechanizing the process.