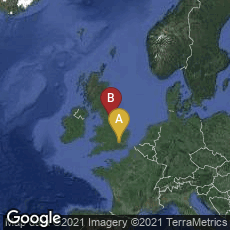 Since at least the time of Ramazzini (1700) it was understood that type founders and typesetters potentially suffered from lead poisoning; typesetters especially if they held pieces of lead type in their mouths in the process of typesetting, or did not wash their hands after handling type.

In 1832 physician Charles Turner Thackrah of Leeds published from London and Leeds the second, much enlarged edition of his treatise on occupational medicine during the Industrial Revolution, The Effects of Arts, Trades, and Professions, and of Civic States and Habits of Living, on Health and Longevity: with Suggestions for the Removal of Many of the Agents Which Produce Disease, and Shorten the Duration of Life.

Regarding printers, on p. 42 Thackrah wrote:

"LETTER-PRESS-PRINTERS are kept in a confined atmosphere, and, with the exception of the pressmen, are generally stationary. Compositors are often subjected to injury from the types. These, a compound of lead and antimony, emit, when heated, a fume which affects respiration, and are said also to produce partial palsy of the hands. Among the printers, however, of whom we have inquired, care is generally taken to avoid composing till the types are cold, and thus no injury is sustained. The constant application of the eyes to minute objects gradually enfeebles these organs. The standing posture long maintained here, as well as in other occupations, tends to injure the digestive organs. Some printers complain of disorder of the stomach and head; and few appear to enjoy full health. Consumption is frequent; arising, however, rather I conceive, from the reduction of the general health by confinement, than from direct injury to the respiratory organs. We can scarcely find or hear of any compositor above the age of 50. In many towns printers are intemperate"

Regarding papermakers, on p. 66 Thackrah wrote:

"PAPER-MAKERS, particularly the aged, are unable to bear the dust, which arises from cutting the rags. Young persons, however, are not sensible of much inconvenience, but few remain for years at the employ. Might not rags be cut by machinery, and this machinery included in a box? The rare are afterwards shaken in a cylindical wire cage, so enclosed as to prevent the escape of any considerable portion of dust."

On p. 128: "PAPER-MAKERS work in very wet rooms. In preparing or washing the rags, the arms and feet are exposed to cold water; and at the vats, the arms are alternately dipped in warm water and exposed to the air, while a dense steam generally fills the room during the process of forming and pressing the paper. The men have only the shirt as a protection to the arms. In the drying-rooms which are open to the weather on both sides, they are without any additional clothing; and the same individuals are, at one time over the warm vapour of the vat, or perspiring at the press, and at another, at the cold employ of putting up the paper to dry. An animal odour arisings from the sizing, but produces no injury. More considerable is the annoyance of a previous part of the process, that of preparing the rags; but this department has already been noticed at p. 66. Pressing, of course, is great exertion; but this is excellent in kind. Bleaching distresses the lungs of the workmen by the suffocating fumes, which arising during the process. No persons, however, are constantly employed in this department, and the suffering consequently is but temporary. Working at the vats, is said to produce asthma occasionally; but individuals bear the employ to the age of 70, and sometimes even to 80. Paper-makers sometimes complain of pain in the limbs and are occasionally, though rarely, affected with such swelling of the joints, as to incapacitate them for work. They are not, however, subject to rheumatic fever, or inflammation of the lungs. In the mill which we examined, no one had been off work from such cause, in the memory of those whom we inquired."

Regarding Bookbinders, Thackrah wrote on p. 45 (perhaps naively): "The work is remarkably easy, and keeps no muscles fixed, nor demands excessive action from any. The workmen suffer no annoyance, except occasionally from the closeness of the atmosphere, and from the smell of the putrid serum of sheep's blood, which they use as a cement. The selection of this substance is unwise, since white of egg or other albuminous matter would answer the purpose, without offending the senses."

Printing by Handpress or by Hand
Medicine
Book Production in the Industrial Revolution: Origins of Mass Media