Cross section of the Bacon & Donkin rotary press from their patent. In the upper part of the image you can see the way that the inventors placed the flat plates on a pentagonal surface. 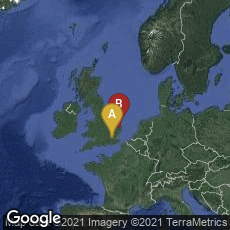 An unusally complete perspective view of the Bacon & Donkin rotary press from their patent.

In 1813 engineer Bryan Donkin of Bermondsey, Surrey, and printer (later: Whig journalist, musician, and miscellaneous writer) Richard Mackenzie Bacon of Norwich invented the first rotary press, for which they received British patent No. 3757 for "Certain Improvements in the Implements or Apparatus Employed in Printing, whether from Types, from Blocks, or from Plates."

"The first [rotary press] to be built, that of Richard Bacon and Bryan Donkin, patented in 1813, was fed by sheets of paper and avoided the problem of fitting type to cylindrical surfaces. The type was still held in flat formes, which were fixed on four sides of a prism, which was square in section. Its axis revolved by the action of a winch, and the type was printed on to the paper by means of a second roller, called by the old name of the platen, its surface being made up of four segments of cylinders, and its circumference when turned round always applying to a type surface. Ink was applied by a large composition cylinder above the prism, which received  ink from a distribution roller supplied from a third metal roller. Bacon and Donkin were thus pioneers in the use of the composition roller and the ink duct. The whole mechanism was quite small, capable standing upon an ordinary writing-table, but it was very complicated and required great accuracy of operation. An exhibition was held in Donkin's factory, and claims were made that the machine would perform the work of eight hand presses. Hansard states that he showed the inventor that work on six of his presses would have required four of the new machines to execute it. The only one of Bacon and Donkin's machines known to Hansard was installed at the University Press, Cambridge, where (in 1825) it 'rests in peace, as not being found in any degree useful' " (Moran, Printing Presses [1973] 175-76).