Image Source: www.deutsche-digitale-bibliothek.de
Albert, who worked for Koenig und Bauer at the time, published his 124 page book the title of which translates as The Machine Master at the High-Speed Press: A Manual for Book Printing Facility Owners, Factories, Machinists and Mechanics. 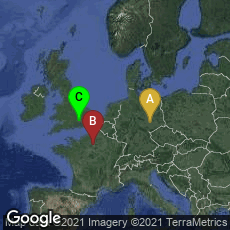 As the machine press industry grew, the first separately published books on machine or mechanized printing appeared in Germany. That Germany would proceed England or France or America in publishing manuals on this subject might not be anticipated, since Germany initially lagged far behind England and America in the application of printing machinery, and in the Industrial Revolution in general. However, after a slow beginning, Germany was gradually becoming competitive in the field. The first book on the subject was that of factory master at König und Bauer, Andreas Albert. As of 2018 when I edited this entry I had not actually seen a physical or digital copy of Albert's small volume entitled Der Maschinenmeister an der Schnellpresse. Ein Handbuch für Buchdruckereibesitzer, Factore, Maschinemeister und Mechaniker (Leipzig, 1853). This work was followed by C. F. Wittig and C. F. Fischer of Leipzig who in 1861 self-published Die Schnellpresse, ihre Mechanik und Vorrichtung zum Druck aller typographischen Arbeiten. This work of 177 pages appears to be the first book published in German on the subject. It predated the first work on the subject in French by Monet (1872) and the first book in English by Gaskill (1877). Revised editions of Wittig's book appeared in 1866 and 1878.

The first separate work on machine printing in French was issued in 1872 by Adolphe-Lucien Monet, who characterized himself as "Prote des Machines" at the press of J.[ules] Claye in Paris. The same press published Monet's book as Le conducteur de machines typographiques. Guide pratique. Études sur les différents systèmes de machines mise en train - Découpage. Monet continued to develop his text, publishing an extensively revised and expanded treatise on the subject in 1878, in which he covered foreign machines as well as French:  Les machines et appareils typographiques en France et à l'etranger. This 437-page work contained 176 illustrations (several double-page) as compared to only 42 in the first edition. The second edition was translated into Spanish in 1880. A further revised and expanded third edition with 484 pages appeared in 1898. This was entitled Machines typographiques et procédés d'impression. Guide pratique du conducteur - Traité complet. By reviewing and comparing the three editions of Monet's work one could follow the technological development of printing through the last quarter of the 19th century.Bigmore & Wyman, II, 48-49.

In 1877 Jackson Gaskill of London, characterizing himself as "Thirty Years Machine Manager," published the first manual published in English exclusively on machine printing: The Printing-Machine Manager's Complete Practical Handbook; or, The Art of Machine Managing Fully Explained. Gaskill's book contained numerous text illustrations showing available machine presses plus an 11-plate color insert showing the 11 press passes required in printing a six-color plate. By the time Gaskill published he was able to divide his book into chapters on machine presses used for special purposes including "BookWork Machines", "Book and Magazine Machines", Book, Magazine, and News Machines", "Magazine and News Machine", "Book and General Commercial Work". He ended his book with extracts from the rules of "The London Society of Machine Managers", established in 1873. The society was large enough to have a controlling council of 25 members and strong enough to pay a full time secretary £130 per annum. Gaskill's book was also notable for its 23-pages of advertisements at the back for a wide variety of presses and related equipment and supplies. Bigmore & Wyman, I, 255, did not consider Gaskill's pioneering treatise very satisfactory.

Two years later, in 1879 printer and writer on printing Frederick J. F. Wilson produced a second attempt at an English language manual on machine printing with Typographic Printing Machines and Machine Printing. A Practical Guide to the Selection of Bookwork, Two-Colour, Jobbing, and Rotary Machines. With remarks upon their Construction, Capabilities, and Peculiarities. Also Instructions in Making Ready, the Preparation of Engravings, Etc. Without acknowledging the existence of Gaskill's book, or the prior works in French and German, Wilson began his preface by stating "At the time this Handbook was originally planned and announced, no modern practical work on Printing-Machines or Machine-Printing existed." Wilson's book represents a significant advance over Gaskill's brief handbook, both from the standpoint of text and illustrations, and it must have experienced a much wider circulation than that of Gaskill, as it underwent four editions by 1884. Nevertheless Bigmore & Wyman III, 88 did not consider it fully satisfactory. Wilson's last word on the topic was a much expanded book issued in 1888, two years after the publication of Bigmore & Wyman's last volume. A collaboration with Douglas Grey, it was entitled A Practical Treatise upon Modern Printing Machinery and Letterpress Printing.