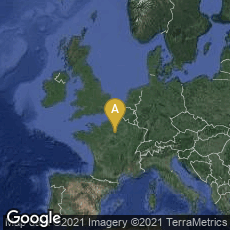 An Image of a Papermaking Machine at Essonne By 1860 the great majority of papermaking was done by machine. In 1860 100,000 tons of paper were produced in the United Kingdom, almost a tenfold increase since 1800. Only 4% was made by hand. Because of reduction in labor costs caused by mechanization the average cost of paper fell 60% in the period from 1800-1860 (Twyman).

In 1860 the leading paper manufacturer in France was La Papeterie d'Essonne, an ancient firm that had been making paper in Corbeil-Essonnes since the 14th century. This image of their factory was drawn by Bourdelin from Turgan's Les grandes usines de France: Tableau de l'industrie Française au XIXe siècle I (1860).

Book Production in the Industrial Revolution: Origins of Mass Media
Papermaking by Machine