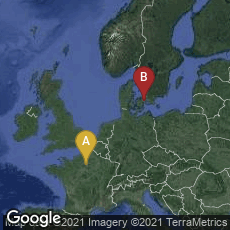 Turgan Critiques the Limitations of the Delcambre Composing Machine Various explanations have been given as to the limited success of the various attempts made throughout the 19th century to invent typesetting machinery before the development of the Linotype and the Monotype. One of the most convincing criticisms that I read was that the machines did not lower typesetting costs except for the savings that could be obtained by employing women to do the typesetting instead of men, and that hiring women was not acceptable in a trade controlled by men. Another criticism was that even if time was saved in the composition process, until the Linotype and Monotype, both of which cast their own type, which was melted after each use, type set by the earlier typesetting machines still had to be manually sorted back into the type cases of the machines--a very time-consuming process. In his Les Grandes usines de France: Tableau de l'industrie Française au XIXe siècle I (1860), Julien François Turgan, who was director of the Moniteur universel newspaper, and thus had plenty of experience with the printing process, devoted his long chapter 3 to a review of the typesetting, page layout, and printing processes at the Imprimerie Impériale, which was presumably among the most technologically advanced in France. In reading through Turgan's beautifully illustrated account I noticed his criticism of the currently available typesetting machines that appears on pp. 103-106. His critique, translated here, differed from the others that I read. Turgan argued that the composition process itself was not the problem; that the problem that needed to be solved, and could not be solved by then available machines, was correcting typesetting errors, and page layout. He wrote:

"Various mechanical processes have been developed in the attempt to diminish the time of the composition; but none, so far, has been able to receive any useful application. The first idea was to melt whole syllables in one piece; but that complicated the case, and made it difficult to justify the lines, and to make corrections. This approach was begun, abandoned, repeated several times. The second idea was to execute the composition automatically. Beautiful and ingenious machines have been built for this purpose; the last two awards at the Universal Expositions are those of Mr. Delcambre, executed in Paris, and that of a Dane, Mr. Christian Sorensen.

"Six of Mr. Delcambre's machines have been running in the studio where our book is printed; but no matter how perfect a composing machine is, it will not be a machine to read, nor a machine to correct, and one will lose in the rearrangements and the corrections the time saved in the mechanical setting of the lines. And why do we need a composing machine? It is not the actual composition which is long; it is making up the pages, the reworkings, the corrections in form and all these delicate and constantly variable operations, which are called functions. Will we find a machine which, taking a manuscript, will render a form all ready, to be entrusted to the press? I do not believe that. And yet, Mr. Sorensen uses the machine to compose for the Foedreland, a Copenhagen newspaper. This would make us believe that Danish journalists make few corrections."