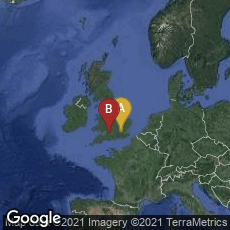 This print with its lengthy caption explaining the operation of the steam carriage was probably issued to promote the product. As the print indicated, the Carriage operated between London and Bath.

Between 1825 and 1829 Sir Goldsworthy Gurney, having obtained a patent for "An apparatus for propelling carriages on common roads or railways – without the aid of horses, with sufficient speed for the carriage of passengers and goods", designed and built a number of steam-powered road vehicles, one of which is illustrated in this hand-colored print. Gurney's work encompassed the development of the blastpipe, which used steam to increase the flow of air through a steam engine's chimney, so increasing the draw of air over the fire and significantly increasing the power-to-weight ratio of the steam engine. The print illustrating Gurney's steam carriage was probably issued to promote the product.

"One of his vehicles was sufficiently robust to make a journey in July 1829, two months before the Rainhill Trials, from London to Bath and back, at an average speed for the return journey of 14 miles per hour—including time spend in refuelling and taking on water. His daughter Anna, in a letter to The Times newspaper in December 1875, notes that "I never heard of any accident or injury to anyone with it, except in the fray at Melksham, on the noted journey to Bath, when the fair people set upon it, burnt their fingers, threw stones, and wounded poor Martyn the stoker". The vehicle had to be escorted under guard to Bath to prevent further luddism."(Wikipedia article on Goldsworthy Gurney, accessed 11-4-2018).

Gurney's venture into steam-powered transportation was not a commercial success, and had to be liquidated, partly because of the obvious danger that passengers must have felt in riding so close to a steam engine.