A View of Lincoln Hill, with the iron Bridge in the Distance, Taken from the side of the River Severn (1788) Engraved by James Fittler after George Robertson.

A View of the Iron Bridge, in Coalbrook DALE, SHROPSHIRE, Taken from the bottom of LINCOLN HILL (1788) engraved by Francis Grisham after George Robertson. 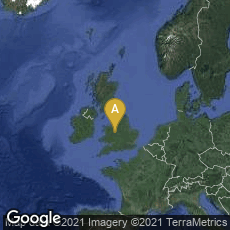 George Robertson's Views of Ironbridge in 1788 In 1788, the year of artist George Robertson's death, John & Josiah Boydell published a series of six images by Robertson of Ironbridge and the Ironbridge Gorge region, so significant in the Industrial Revolution. The most famous image, engraved by James Fittler, is titled, A View of the Iron Bridge, taken from the Madeley side of the River Severn, near Coalbrook DALE, in the County of SALOP.

The print is captioned, "This Bridge was erected in 1779. It is the ifrst that was ever made of Cast Iron only. The abutments are stone & covered with plates of Iron. The Road over the Bridge is 24 feet wide, the span of the Arch is 100 feet & 6 Inches and the height from the Base line to the Center is 40 feet, the weight  of the Iron employed in the whole Bridge is 378 Ton and a half. All the principle parts were erected in the course of three Months without the least obstruction in the navigation of the River."