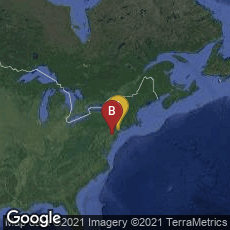 Certificate dated 1864 by John Sartain (1808-1897). This combines several techniques: etching, mezzotint, engraving, and stipple on cream wove paper. The iron handpress is of the American Columbia design widely used at the time.

Tracy, George A. History of the Typographical union, its beginnings, progress and development, its beneficial and educational features together with a chapter on the early organization of printers (1913) 20.