The sound producing mechanism of Kempelen's speaking machine, from the original in the Deutsches Museum. 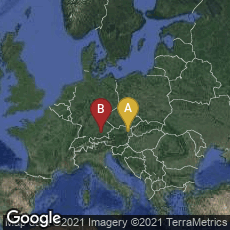 Unlike von Kempelen’s fraudulent chess-playing Turk automaton, Kempelin's speech synthesizer actually worked. Kempelen's synthesizer was the first that produced not only some speech sounds, but also whole words and short sentences. Kempelin believed that it was possible to acquire skill in using the machine within three weeks, especially if one chose to synthesize sentences in Latin, French, or Italian. German von Kempelen considered much more difficult to synthesize because of its many closed syllables and consonant clusters.

"The machine consisted of a bellows that simulated the lungs and was to be operated with the right forearm (uppermost drawing). A counterweight provided for inhalation. The middle and lower drawings show the 'wind box' that was provided with some levers to be actuated with the fingers of the right hand, the 'mouth', made of rubber, and the 'nose' of the machine. The two nostrils had to be covered with two fingers unless a nasal was to be produced. The whole speech production mechanism was enclosed in a box with holes for the hands and additional holes in its cover.

"The air flow was conducted into the mouth not only by way of an oscillating reed, but also through a narrow shunting tube. This allowed the air pressure in the mouth cavity to increase when its opening was covered tightly in order to produce unvoiced speech sounds. Driven by a spring, a small auxiliary bellows would then deliver an extra puff of air at the release.

"With the left hand, it was also possible to control the resonance properties of the mouth by varied covering of its opening. In this way, some vowels and consonants could be simulated in sufficient approximation. This was not really a simulation of natural articulation, since the shape of the mouth of the machine in itself remained constant. Some vowels and, especially, the consonants [d t g k] could not be simulated in this way, but only feigned, at best. An [l] could be produced by putting the thumb into the mouth.

"The function of the vocal cords was simulated by a slamming reed made of ivory (leftmost drawing). Although the effective length of the reed could be varied, this could not be done during speech production, so that the machine spoke on a monotone.

"Two of the levers to be actuated with the right hand served the production of the fricatives [s] and . . . as well as [z] and . . . by means of separate, hissing whistles (right drawing). A third one effectuated the production of a rattling [R] by dropping a wire on the vibrating reed (middle drawing)." (http://www.ling.su.se/staff/hartmut/kemplne.htm, accessed 12-14-2008).

Kempelin's final version of the machine, which differs slightly from the version shown in the book, is preserved in the Deutsches Museum, Munich, in the department of musical instruments.