The diagrams associated with John Gamble's patent are essentially copies of the drawings for the Robert brevet filed in France.

A patent drawing from the Fourdinier & Gamble patent of 1807. This was the first patent on what came to be called the Fourdrinier machine. 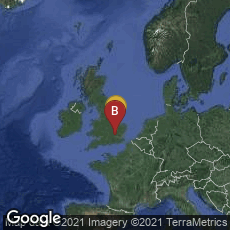 Because of disagreements between Louis-Nicolas Robert and his partners, St. Leger and François Didot, and also because France lagged behind England in industrial development after the French Revolution, François Didot believed that development and commercialization of the papermaking machine would be more successful in England than it could be in France at the time. With this in mind Didot sent his English brother-in-law, John Gamble, then employed in the office of the British Commissioner for exchanging prisoners-of-war in France, to London to develop the technology. Gamble left Paris in March 1801, and only a month later received an English patent for the papermaking machine. The patent spcification No. 2487 was granted for an "Invention of Making Paper in single Sheets, without Seam or Joining, from One to Twelve Feet and upwards Wide, and from One to Forty-five Feet and upwards in Length." Gamble's specification was, according to Clapperton, essentially a translation and expansion of Robert's patent. The title of the specification, with its emphasis on the production of very large sheets, indicates that the original market for the product was expected to be wallpaper.

In London Gamble was introduced to Henry and Sealy Fourdrinier, of the firm of Bloxam & Fourdrinier, the leading wholesale stationers in London, who took great interest in the invention, and set about trying to improve it. In 1802 the Fourdriniers hired the young English engineer Bryan Donkin to improve the machine and oversee its development at mills which they opened at St. Neots, Huntingdonshire, and at Frogmore and Two Waters, Hertfordshire. Undoubtedly they began manufacturing paper there shortly thereafter. While tracing the earliest surviving examples of machine-made paper is difficult as there are few records, the first book printed on machine made paper was issued as early as 1804, and copies of that have survived.

In 1806 Henry Fourdrinier had obtained patent No. 2951 for a method of making a machine for manufacturing paper of an indefinite length, laid and wove, with separate moulds. However, Fourdrinier's patent for the endless chain-mould machine did not accompany his specification with drawings and did not describe the machine in much detail. Thus Didot and his associates, including Fourdrinier, thought it appropriate to patent a more detailed specification at this time. This the Fourdriniers and John Gamble accomplished in 1807. Clapperton, op. cit., 54-58. Saint-Leger Didot (Leger Didot), then living in England, further improved the technology in 1812 when he was granted British patent No. 3568 for "Certain other Improvements upon the Said Machines for the Making of both Woven and Laid Paper."

The cost savings from machine papermaking were apparently evident almost at once. In his Chronology of the Origin and Progress of Paper and Paper-Making, 5th edition (1876) American printer and printing and papermaking historian Joel Munsell wrote on p. 62 that in 1806

"The patentees of the Fourdrinier machine laid a statement before the public containing a comparative estimate of the expense attending seven vats, and that attending a machine employed upon paper sized in the engine, preforming the same quantity of work as seven vats, at the rate of twelve hours a day. The expense of seven vats per annum for £2,604: 12s.; a machine doing seven vats' work was £734:12s.; balance saved by the machine per annum, £1,870. The expense of making paper by hand at this time was 16s. per cwt.; by machine, 3s 6d."

Nevertheless, like many new technologies, machine papermaking did not immediately catch on in the British paper industry. It also required numerous improvements over decades and generations before it was genuinely efficient. As had happened with certain other new technologies, some of the original inventors failed to benefit:

". . .of the early pioneers who invented, developed, and financed the machine through the difficult years of its evolution, Louis Robert, Henry Fourdrinier, Didot St. Leger and Gamble, all died in comparative poverty. Robert died at 66 while managing a small school at Vernouillet, on the 28th August, 1828, leaving a wife and six children. Didot, who had returned to France, died in 1829 near the same village; and Henry Fourdrinier died on the 9th September, 1854, at the age of 88, . . . near Rugeley. John Gamble was still living in 1857, and there does not appear to be any authentic date of his death. These four men, who where so intimately connected with, and who gave so much of their lives and fortunes to, the development of the Fourdrinier machine, lived to see many successful paper-mills in which hundreds of paper-making machines were operating, from which they they themselves werre able to get nothing at all. The Bryan Donkin Company alone had built 197 paper-making machines before Henry Fourdrinier died, and by that time many other engineering firms were also building this type of machine. The Fourdrinier firm, of which Henry Fourdrinier was the head, lost at least £60,000 in the first ten years of the development of the machine, and became bankrupt in the process. Leger Didot lost his paper-mill and his business. Gamble lost his paper-mill at St. Neots to Matthew Towgood; and Robert was left completely out of it by everybody, and eventually got nothing but a statue and memorial many years after he died" (Clapperton, The Paper-Making Machine. Its Invention, Evolution and Development  [1967] quote 12-3, see also 34-44).

Louis-Nicolas Robert Invents the Papermaking Machine
The First Papermaking Machine is Developed in France by Berte and Grevenich, Leading to a Patent Dispute with Saint-Léger Didot
Papermaker Jean Abbot Dusautoy Analyzes the Costs of Making Paper by Hand