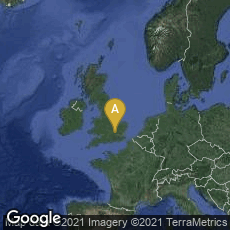 In July 1809 English paper dealer and inventor John Dickinson of Aspley, Hertfordshire, patented the cylinder-mould papermaking machine, receiving British patent No. 3191 for "Certain Improvements on my former Patent Machinery for Cutting and Placing Paper, and also certain Machinery for the Manufacture of Paper by a new Method." Dickinson's concept, which he developed through his partnership with the publisher George Longman, who provided the initial working capital, was the first to allow for commercially viable machine production of paper, and of the early inventors in papermaking, Dickinson was the only machine paper-maker to a develop a business that remained financially successful for generations. However, Dickinson's machine was apparently not functional originally, and, according to Coleman p. 191 Dickinson initially installed machines of the Fourdrinier type at his mills.

Dickinson's process, which was eventually perfected, consisted of a perforated cylinder of metal, with a closely fitting cover of finely woven wire, which revolved in a vat of pulp. The water from the vat was carried off through the axis of the cylinder, leaving the fibers of the pulp clinging to the surface of the wire. An endless web of felt passed through what was known as a 'couching roller' lying upon the cylinder drew off the layer of pulp which when dried became paper. (Clapperton, op. cit. 54-77.)