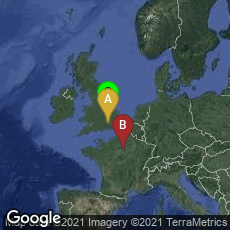 Portrait of Louis-Nicolas Robert, from a watercolor painted by his sister. Reproduced from Nicolas Louis Robert and his Endless Wire Papermaking Machine (2000).

As in Germany, but for somewhat different reasons, the Industrial Revolution occurred in France significantly later than in England. Dates for the beginning of the Industrial Revolution in France vary; one date that is used by scholars is the mid-1830s. Reasons for the delay of industrialization in France include the massive economic disruption caused by the French Revolution, and that France did not possess large and accessible supplies of coal and iron ore as in Great Britain and Belgium. On the other hand, measures introduced by the State after the 1789 revolution encouraged industrialization. The introduction of the "code civil" occurred simultaneously with the abolition of the old guild restrictions and internal customs tariffs. The state created the Bank of France and stabilized the currency, and the state became involved in the construction of roads and canals. Perhaps ironically however, the success of French agriculture indirectly discouraged industrialization in France. The 1789 revolution freed farmers and peasants from debts and taxes, thereby guaranteeing them a relatively secure existence in agriculture, and preventing the creation in France of a large supply of unemployed agricultural workers like had occurred in England. Those unemployed agricultural workers found jobs in English factories. These were among the reasons why industrial processes in France, including book production, were mechanized relatively late in the Industrial Revolution, and why papermaking by machine was initially developed in England rather than in France even though it was invented in France.

Papermaking by machinery did not begin until 1798 when French soldier and mechanical engineer Louis-Nicolas Robert invented the first papermaking machine. After completing his military career, in 1790 Robert became indentured at one of the Didot family's Paris publishing houses. First working under Saint-Léger Didot as a clerk, he later switched to a position as "inspector of personnel" at Pierre-François Didot's hand paper-making factory in Corbeil-Essonnes in the suburbs of Paris. This establishment dated back to 1355, and supplied paper to the Ministry of Finance for currency manufacture, among other clients. Both Robert and Didot grew impatient with the quarrelling workers, vatmen, couchers, and laymen, so Robert was motivated to find a way to mechanize the traditional labor-intensive process of making paper by hand.

Handmade paper was made one sheet at a time, by manually dipping a rectangular frame or mould with a screen bottom into a vat of pulp. The frame was removed from the vat, and the water was pressed out of the pulp. The remaining pulp was allowed to dry; the frame could not be re-used until the previous sheet of paper was removed from it. Robert's machine had a moving screen belt that would receive a continuous flow of stock and deliver an unbroken sheet of wet paper to a pair of squeeze rolls. As the continuous strip of wet paper came off the machine it was manually hung over a series of cables or bars to dry. This continuous, unbroken sheet of paper later had to be cut into separate sheets.

Robert applied for a French patent for his machine on September 9, 1798; it was granted on January 18, 1799. According to the French patent database, bases-brevets19e.inpi.fr, in which the patent is recorded as dossier 1BA95, the patent, which was granted for 15 years, was entitled "machine à faire le papier, d'une très grande étendu". The database records that Robert transferred the patent to Léger Didot on June 27, 1800. The database includes a reproduction of the first page of the manuscript of the patent. The patent was first published in print on pp. 18-23 of  volume 5 of Description des machines et procédés spécifiés dans les brevets d'invention (Paris: Madame Huzard, 1823). The text of the patent is brief and primarily explains the function of the machine by reference to two drawings reproduced on plate 4 of the volume. By the time the patent was published in print it would have been primarily of historical interest.

Over a century after Robert's invention, in 1976 Janet Fourdrinier, descendent of the pioneer English papermakers, sold at auction the original color engineering drawings of Robert's papermaking machine, which were presumably acquired by the Fourdriniers when they purchased Gamble's patent in 1804. Besides the signature of the original artist, the drawings bore the signature of John Gamble, These drawings were purchased by paper dealer, collector and papermaking historian Leonard B. Schlosser. After Schlosser's death the drawings were reproduced in color in their original size and published in a limited edition by Henry Morris of the Bird & Bull Press with an explanatory introduction in Nicolas Louis Robert and his Endless Wire Papermaking Machine with Facsimiles of the Inventor's Original Drawings of the first Paper Machine, Including a chapter on the papermaking historian Leonard B. Schlosser (2000).

Clapperton, The Paper-Making Machine. Its Invention, Evolution and Development (1967).