Jeremy Norman Collection of Images -&nbspCreative Commons
First American edition of Shirley published by Harper & Brothers expensively in paper wrappers for only 37 1/2 cents per copy. The wrappers were relatively fragile and needed to be repaired on this copy. Harpers was one of the first American publishers of fiction to print all their books on printing machines. This we know from the book on their book manufacturing facilities that Harpers issued in 1855. Jeremy Norman Collection of Images -&nbspCreative Commons
Harpers issued the first American edition of Shirley inexpensively in a very compressed two-column format similar to the typesetting in newspapers. This, of course, allowed the book to be printed on fewer pages, reducing paper and printing costs. 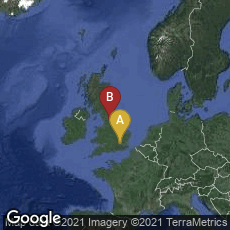 Charlotte Brontë's "Shirley", a Novel in the Context of Machine-Breaking in the Industrial Revolution In 1849 Charlotte Brontë's novel Shirley was published as a 3-decker, or three-volume novel, by Smith, Elder in London. At this time the standard or typical publication format for novels in England was the short run expensive three-volume cloth-bound format, in which novels were primarily rented by lending libraries such's Mudie's rather than sold. This convention in publishing supported the publishers and the commercial lending libraries, but restricted the number of copies of a novel sold.

Brontë issued the work under her nom de plume Currer Bell. Brontë set the novel in Yorkshire during the industrial depression in 1811-12 resulting from the Napoleonic Wars and the War of 1812. The economic depression, and the manufacturers desire to reduce expenses through the installation of machinery, led to the Luddite uprisings in the Yorkshire textile industry. Though nearly 40 years had passed since the Ludd riots, the problems of employment in the factory environment were very current when Brontë's novel was published.

Brontë's novel about the social impacts of industrialization seemed to me to be the appropriate choice to illustrate printing and publishing conventions that had developed as a result of the Industrial Revolution. This small edition rental system for the publication of novels was a hold-over from publishing and printing methods that evolved before the development of printing machines. Because the edition was small, the book could have been printed by handpress or printing machine; however, by 1849 the paper used on this, and most other "commercial" publications, was machine-made.

By this time innovative publishers like Charles Knight were having all their books printed by printing machines, and Knight, in particular, had, as far as I can tell, virtually all his larger publications first issued in parts to make them even more affordable. Most of the subscribers to Knight's books in parts had them bound once they were complete. Copies that survived in original cloth publishers bindings would have been bound after serial publication of the parts.

Publications of novels in the United States was unrestrained by the three-decker convention. As a result, Harpers issued the first American edition of Shirley as an inexpensive paperback for only "37 1/2 cents" per copy. The survival rate of those first American editions published in thin and fragile paper wrappers was, of course, far lower than the clothbound three-deckers sold in England, and the copies that survived in the original printed wrappers were generally rather worse for wear because of the rather flimsy way in which they were originally bound.