The fare schedule is this copy of the third edition has an added printed slip on the right with service and fare updates.

The ads for additional transportation in this guide all describe horse-drawn services as the Liverpool & Manchester was then virtually the only steam-driven railroad carrying passengers. 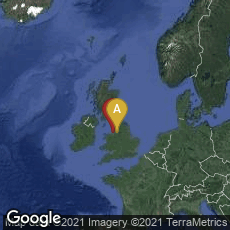 An Illustrated Guide to the Liverpool & Manchester Rail-Way, the First Steam-Powered Railroad and the First Railroad to Carry Passengers

One of the earliest views of a passenger train in operation in a realistic setting. The rail cars are essentially coaches mounted on train chasis.

The Liverpool and Manchester Rail-Way, which opened for business on September 15, 1830 after seven years' construction, was the first railway to rely exclusively on locomotives driven by steam power, with no horse-drawn traffic permitted at any time. It was also the first to be entirely double track throughout its length; the first to have a signalling system; the first to be fully timetabled; and the first to carry mail. It was also one of first to carry passengers on a regular basis. One of the results of all this innovation was huge popular interest reflected in a large number of publications of all kinds about the railroad, including a whole new genre of publishing--railroad travel guides.

Between 1830 and 1831 there were three editions of James Scott Walker's An accurate description of the Liverpool and Manchester Rail-Way...issued in Liverpool by J.F. Cannell. This pamphlet contains two folding engravings of the train in operation, the train schedule and list of fares, and details of sights along the way. My copy of the third edition, published in 1831, has an inserted slip updating the schedule and list of fares. Walker's may be the earliest guide to the first railroad to carry passengers on a commercial basis that contains images of the railroad in operation.