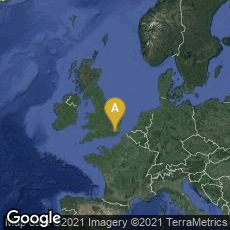 In 1970 Henry Morris of the Bird & Bull Press reproduced in facsimile Proceedings at a Meeting of the Vat Paper Makers held at The Bell Hotel Maidstone on Tuesday 8th March 1853. This elegantly penned transcript of a meeting between vat men in the hand-made paper industry and their employers documented the economic disruption that the Fourdrinier machine and later improvements in machine-made paper had caused in the traditional hand-made paper industry.

"Such being the position of things, how has the [hand-made paper] trade been going on during that period?- Why, it has been a Trade that has been gradually diminishing and that no in any slow degree, but in a very considerable degree. I cannot speak to any knowledge of the Trade for more than 14 or 15 years, but for the last 7 years I have endeavoured as far as I can to put down what the progress - or, rather the Irishman's progress- going backwards- of the Vats has been... I speak as for as my knowledge goes, and shall be glad to be corrected, if I am wrong. But while the Vat trade has been in this situation, what has been the condition of the Machines? What has been the rise and progress of their prosperity? And this is a point to which I must beg your attention. It appears to me that this is not a case of Men versus Masters, but it is Men versus Machines, and that fact I beg your calm attention to. The Machines have got the whole of the  Printing trade, there are now no [hand-made paper] Mills in Buckinghamshire and Herefordshire and while the total quantity of paper has increased four fold during the last few years, the quantity produced by Vats of course has diminished.

"The first great innovation was made by the drying Cylinders- The Machine, beautiful as it is, could do nothing, until they could get the drying apparatus, and the Cylinders were adapted. Then came a greater innovation still, Ranson's sizing and drying Machine- this is now about ten years ago. Then we rested on our Oars and 'Oh but the cannot make watermarks- we have them there' and what soon afterwards did they do? I recollect a conversation which struck me very much that I had with Mr. Francis Pirie of Aberdeen in 1845- he was then struggling hard, having got these new sizing machines on his premises, to introduce papers made by machinery for the purpose of books such as Royals, Demys and so, I said, ' the public have all along had laid papers. What is the use of trying to introduce another description- they will adhere to the old method'. He said here is a beautiful wove paper made by machine we will go on and it was not two years before the Dandy roller came out, and watermarks were accomplished- It is like the waves of the Sea coming one after the other until the Vat trade is nearly engulfed...."