An English translation of Senefelder's facsimile of Dürer's designs for a prayer book was the first book that Rudolph Ackermann published when he opened his publishing business in London on September 1, 1817. The upper printed wrapper on the original binding of Ackermann's edition was worn in my copy. Charles Guermonprez lithography facility in Saint-Omer, a commune in France, c. 1860. The printing machine in the left foreground appears to be operated by a man turning a large wheel. 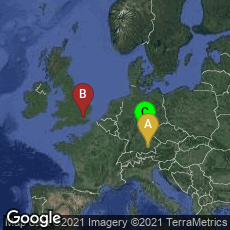 The frontispiece of Senefelder's Manual of Lithography printed in two colors as well as black, reproducing the color printing of the Mainz Psalter, with precise registration, is considered the beginning of chromolithography. This version is, of course, a translation, with redrawn illustrations, from Senefelder's first edition published the previous year.

In 1796 German actor and playwright Alois Senefelder invented lithography (from Greek λίθος - lithos, 'stone' + γράφω - graphο, 'to write') as a cheaper way of publishing his plays. Lithography was the first planographic printing process, and the first radically new method of printing since Gutenberg’s invention of printing by movable type.

Senefelder experimented with a new etching technique using a greasy, acid resistant ink as a resist on a smooth fine-grained stone of Solnhofen limestone from Bavaria (Bayern), halfway between Nuremberg and Munich. He discovered that this could be extended to allow printing from the flat surface of the stone alone. Gradually he brought his technique into a workable form, perfecting both the chemical processes and the special form of printing press required for using the stones. Senefelder called it Steindruckerei (stone printing) or chemical printing, but the French name lithographie (lithography) became more widely adopted. With the composer Franz Gleißner, in 1796 Senefelder started a publishing firm using lithography. The two collaborated for about 30 years. In his A Complete Course of Lithography (1819) p. 13-14 Senefelder described how how he and Gleissner decided in 1796 to apply Senefelder's new printing process to publishing music as a first commercial venture:

"A page of wretchedly printed music from a prayer-book, which I accidentally met with at a shop at Ingolstadt, suggested to me the idea that my new method of printing would be particularly applicable to music printing; I, therefore, resolved on my return to Munich, to go directly to Mr. Falter, a publisher of music, to offer him my invention, and beg his assistance. My natural shyness alone prevented me from executing this plan immediately; I had twice passed his door, without having the courage to enter the house, when I accidentally met an acquaintance, to whom I had occasionally communicated something of my invention; and, conversing with him, I learned that Mr. Gleissner, a musician of the Elector's band, was just about to publish some pieces of sacred music. This was most welcome news to me, as Mr. G. was a particular friend of mine.

"Without further delay, I called on Mr. Gleissner, to whom I communicated my new invention, offering him, at the same time, my services for the publication of his music. The specimens of music, and other printing, which I showed him, obtained his and his wife's highest approbation; he admired the neatness and beauty of the impressions, and the great expedition of the printing; and, feeling himself flattered by my confidence, and the preference I gave him, he immediately proposed to undertake the publication of his music on our joint account. I had, in the mean time, procured a common copper-plate printing press, with two cylinders; and, though it was very imperfect, it still enabled me to take neat impressions from the stone plates. Having, therefore, copied the twelve songs, composed by Gleissner, with all possible expedition, on stone, I succeeded in taking, with the assitance of one printer, 120 copies from it. The composiing, writing on stone, and printing, and had been accomplished in less than a fortnight; and in a short time we sold of these songs to the amount of 100 florins, though the whole expense of stones, paper, and printing, did not exceed 30 florins, which left us a clear profit of 70 florins."

According to Hans Schneider, Makarius Falter (1762-1843) und sein Münchner Musikverlag I: Der Verlag im Besitz der Familie (1796-1827); Verlagsgeschichte und Bibliographie (1993) p. 75, the title of Senefelder's first commercial publication by means of lithography was 12 Neue Lieder fürs Klavier. . . von Franz Gleissner. .  . München, 1796. As Senefelder recounts in his Complete Course of Lithography p. 20 the following year Falter issued his first lithographed edition of music: Mozart's IIme Partie de Grand Opera Die Zauberflöte (Munich, 1797; Schneider  p. 81.) This was drawn on stone by Senefelder and printed at Mr. Falter's house by two soldiers whom Senefelder had instructed in the process of printing. "But these workmen, not entering into the spirit of the art, spoiled a great deal of paper, so that Mr. Falter at last prefered printing again from copper." Nevertheless Falter continued to issue music printed both by lithography and copper plate engraving.

In 1799 Senefelder met with German composer and music publisher Johann Anton André in Munich. Senefelder agreed to collaborate with André, and granted André's firm the right to use the new printing method. This occurred for the first time in 1800 when a 10-page selection from André's own opera Die Weiber von Weinsberg came off the press.

On June 20, 1801 Senefelder received British patent no. 2518 for "A New Method and Process of performing the Various Branches of the Art of Printing on Paper, Linen, Cotton, Woollen and other Articles." This patent, with 18 pages of text and 9 figures on a large folding plate, represented Senefelder's earliest technical description of the process of lithography. It may be worthy of note that, as the specification of the patent indicated, Senefelder foresaw the wide range of applications of his process beyond strictly printing on paper. By 1803 Senefelder adapted zinc plates as substitutes for limestone in the process of lithography. Zinc plates eliminated the necessity of using smooth fine-grained limestone, and made it possible to lithograph larger images with zinc plates that were much lighter in weight, and thus more manageable in the press than stones of equivalent dimensions.

In order to promote the virtues of lithography for reproducing art works, in 1808 Senefelder issued from his press in Munich an edition of the prayer book with Albrecht Dürer's drawings as Albrecht Dürers Christlich-Mythologische Handzeichnungen.  Three centuries earlier, in 1512 Maximilian I, archduke of Austria and Holy Roman Emperor, had appointed Dürer artistic advisor for his print projects. Like all rulers of his age, Maximilian was acutely aware of his personal status; he became the first ruler to recognize the potential of the print as an effective way of perpetuating his name and dynasty. Among Dürer's commissions for the emperor, were forty-five pages of marginal drawings to the manuscript Prayer Book of Maximilian (1515). These revealed a light-hearted and witty side to Dürer's graphic work. Dürer's drawings for Maxmilian's prayer book remained unpublished until Senefelder's edition. Frequently this small folio volume from 1808 has been considered the first book printed entirely by lithography. It contained a lithographed portrait of Dürer, a lithographed title in black and violet, 2 pages of lithographed text in Senefelder's hand, and 43 lithographs by Johan Nepomuk Strixner reproducing each drawing in the single color in which Dürer drew it, the single colors per drawing, including violet, sepia, red, black or green. However, the honor for the first book printed by entirely by lithography may be assigned to Johann Anton André's  Thematisches Verzeichniss sämmtlicher Kompositionen von W.A. Mozart (1805).

In 1817 when Anglo-German bookseller, inventor, lithographer, publisher and businessman Rudolph Ackermann set up his lithographic press in London his first publication was an English version of Senefelder's first lithographic book: Designs of the Prayer Book. Published September 1, 1817 at R. Ackermann's Lithographic Press.  The following year, in 1818 Senefelder published a manual of lithography in Munich entitled Vollständiges Lehrbuch der Steindruckerey. This outstanding and comprehensive manual, which included many different examples of lithography, also introduced  chromolithography, with a two-color plus black lithographic reproduction of the first page of the 1457 Mainz Psalter reproducing its large two-color initial letter. Senefelder's book was translated into French and published Paris in 1819 as l'Art de la lithographie en construction pratique contenant la déscription claire et succincte des différents procédés à suivre pour déssiner, graver et imprimer sur pierre; precédée d'un histoire de la lithographie et de ses progrès. The same year the book appeared in English, published in London by Ackermann as A Complete Course of Lithography: ... Accompanied by Illustrative Specimens of Drawings. To Which is Prefixed a History of Lithography. Of the three editions of Senefelder's textbook, it has been argued that the English edition had the most impact in spreading the technique of lithography around the world.