Beaumont disapproved of Luddite behavior; as stated in the text reproduced here, he was in favor of any machine that would reduce the strain of human labor. What he failed to consider was how mechanization disemployed people during the Industrial Revolution. Beaumont's work was cheaply printed in Sheffield, probably by a printer who was not accustomed to printing books. This copy preserved the original printed wrappers in a crude outside wrapper of rough brown paper. An original flyer or poster published on January 16, 1813 reporting one of the Luddite executions in York. This rare and ephemeral item was extensively repaired. 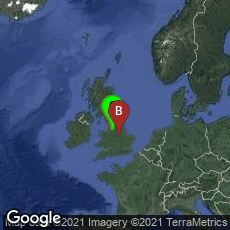 Few books contemporaneous to the Luddites contained references to their behavior in their titles. The Beggar's Complaint published anonymously by the Rev. George Beaumont in 1812 was one of the few.

Struggling in the depression caused by bad harvests and the Napoleonic Wars, and concerned about the loss of jobs due to mechanization in the textile industry, towards the end of 1811 workers and craftmen founded the Luddite movement to oppose the factory system by destroying power looms and other means of factory production. Machine-breaking had been criminalized in England as early as 1721, the penalty being penal transportation. As a result of continued opposition to mechanization, the Frame Breaking Act 1812 made destruction of means of production, such as power looms and steam engines, but also a wide range of other equipment, subject to the death penalty.

"Towards the close of the year 1811, a spirit of riot and insubordination manifested itself in the country of Nottingham, which, in the course of that year, extended to the counties of Derbyshire, Leicestershire, Lancashire, Cheshire, and Yorkshire, and in some degree, pervaded all the manufacturing districts of England. The insurgents, who assumed the name of 'LUDDITES,' probably with a view of inspiring their adherents with confidence, the malcontents gave out that they were under the command of one leader, whom they designated by the factitious name of Ned Ludd, or General Ludd, calling themselves Ludds, Ludders, or Luddites. There is no reason, however to believe that there was in truth any one leader. In each district where the disaffection prevailed, the most aspiring man assumed the local superiority, and became the General Ludd of his own district.

"The avowed and immediate object of the Luddites was the destruction of certain articles of machinery, the use of which had superseded or diminished manual labour, in the manufacture of the articles to which they were applied. These disturbances, which had now attracted the attention of parliament, and excited apprehensions of the most alarming nature, first manifested themselves by the destruction of a great number of newly-erected stocking-frames, by small parties of men, principally stocking-weavers, who assembled in various places round the town of Nottingham. The men engaged in the disturbances were at first principally those thrown out of employment by the use of the new machinery, or by their refusal to work at the rate of wages offered by the manufacturers, and they particularly sought the destruction of frames owned those hosiers, or worked by those men who were willing to work at the lower rates. In consequence of the resistance opposed to the outrages of the rioters, in the course of which one of their number was shot, on the 11th of November, at Bullwell, magistrates found it necessary to call in the assistance of a considerable armed force, which was promptly assembled, consisting, at first, principally of local militia and volunteer yeomanry, to whom were added about four hundred special constables. The terror of this force seemed for a time to allay the spirit of insurbordination; but before the end of the month of November, the outrages were renewed, and assumed a more serious systematic character. In several villages, the rioters not only destroyed the frames, but they levied contributions for subsistence, which rapidly increased their number, and enlarged their sphere of action.

"A considerable regular military force was now went to Nottingham, and in January 1812, two of the most experienced police magistrates were dispatatched from London to that place for the purpose of assisting the local authorities in their endeavours to restore tranquillity in the disturbed districts. The systematic combination with which the outrages were conducted, the terror which they inspired, and the disposition of many of the lower orders to favour, rather than to oppose them, made it very difficult  to discover the offenders, or to obtain evidence to convict those who were apprehended. Some, however, were afterwards proceeded against at the spring assizes of 1812, at Nottingham, and seven persons, convicted of different offences connected with the riots, were sentenced to transportation. In the meantime, acts were passed by the legistature for establishing a police in the disturbed districts, upon the ancient system of watch and war, and for making the destruction of stocking-frames a capital crime, punishable by death.

"Early in the year, the spirit of riot and distrubance spread itself into Cheshire and Lancashire; at Tentwistle, in the former county, the cotton machinery in Mr. Rhodes's mill was totally destroyed; and at Stockport, the house of Mr. Goodwin was set on fire on the 14th of April, and his steam-looms destroyed. On the 20th of the same month, the manufactory of Messrs. Daniel Burton and Sons, situated at Middleton, six miles from Manchester, was attached by a mob, consisting of several thousand persons, and although the rioters were repulsed, and four of their number killed by the military force assembled to protect the works, a second attack was made on the following day, when Mr. Emanuel Burton's dewelling-house was set on fire, and destroyed. About the same time riots took place in Manchester, of which the alleged cause was the high price of provisions. At West Houghton, near Bulton-le-moors, the rioters taking advantage of the absence of the military, assailed the large manufactur of Messrs. Wroe and Duncuft, and after having forced the doors, and set fire to the mill and machinery, dispersed before the soldiers could be assembled

"Symptoms of the same lawless disposition appeared at Newcastle-under-line, Wigan, Warrington, and Eccles; and the contagion had spread to Carlisle, and into Yorkshire. In Nottinghamshire, the machinery obnoxious to the rioters was wide weaving frames; in Lancashire, looms wrought by steam; and in Yorkshire, gig-mills, or machinery used in the shearing of woollen cloth—all inventions of modern date, and each of them calculated to supersede or diminish the demand for manual labour. . . .

"The causes alleged for these alarming proceedings were generally the want of employment for the working manufacturers—a want, however, which was the least felt in some of the places where the disorders were the most prevalent; another of the alleged causes was the application of machinery to supply the place of labour; and a third, the high price of provisions. An opinion also prevailed at the time, that the views of some of the persons engaged in these excesses extended to revolutionary measures, and contemplated the overthrow of the government; but his opinion seems to have been supported by no satisfactory evidence; and it is admited on all hands, that the leaders of the riots, although possessed of considerable influence, were all of the labouring classes.

"That societies existed for forwarding the objects of the disaffected was clearly manifest, all which societies were directed by a secret committee, which might be considered as the great mover of the whole machine; and it was established by the various information received from different parts of the country, that these societies were governened by their respective secret committees; that delegates and messengers were continually dispatched from place to place for the purpose of concerting plans and conveying information; * [*"A small weekly contribution paid by every member of these combinations formed a fund, by which the delegates and messengers were wholly or in part supported, according to the nature and extent of their services. This fund there is reason to suppose was also applied to the support of the imprisoned Luddites; and its application in this way, combined with the nature of the oath, may in some degree account for the paucity of information collected from them while in prison, and even in the prospect of death. In fact, the made no disclosures. All their secrets, whether they related to the organization of their societies, the names of their leaders, or their depots of arms, died with them."] that an illegal oath of the most atrocious kind was extensively administered;* [*"Several copies of the oath were discovered, but the following appears to be the correct version: OATH. 'I. A. B., of my own voluntary will, do declare, and solemnly swear, that I never will reveal to any person or persons under the canopy of heaven, the names of the persons, who compose this secret committee, their proceedings, meetings, places of abode, dress, features, complexion, or anything else that might lead to a discovery of the same, either by word, deed, or sign, under the penalty of being sent out of the world by the first brother who shall meet me, and my name and character blotted out of existence, and never to be remembered but with contempt and abhorrence; and I further now do swear, that I will use my best endeavours to punish by death any traitor or traitors, should any rise up among us, wherever I can find him or them, and though he should fly to the verge of nature, I will pursue him with unceasing vengeance. So help me God, and bless me to keep this my oath inviolable."] that secret signs were arranged, by which the persons engaged these conspiracies were known to each other. The military organization, carried on by persons enaged in these societies, had also prceeded to an alarming length; in some parts of the country they assembled in large numbers, chiefly by night; upon heaths or commons, taking the usual precaution of paroles and counter-signs. The muster-rolls were called over by numbers, not names; they were directed by leaders, sometimes in disguise; they placed sentries to give alarm at the approach of any person, whom they might suspect of an intention to interrupt or give information opf their proceedings; and they dispersed instantly at the firing of a gun or other signal agreed upon, and so dispersed to avoid detection . . . . (An Historical Account of the Luddites of 1811, 1812, and 1813, with Report of their Trials at York Castle, from the 2nd to the 12th of January, 1813, before Sir Alexander Thompson and Sir Simon le Blanc, Knights, Judges of the Special Commission [1862] 7-12).

In January 1813 64 persons were tried for crimes tied to the Luddite movement; 14 were executed.  The proceedings of the trial were published as Report of Proceedings under Commissions of Oyer & Terminer and Gaol Delivery for County of York, Held at the Castle of York, before Sir Alexander Thomson, Knight and Sir Simon Le Blanc, Knight, from the 2nd to the 12th January 1813.  From the shorthand notes of Mr. Gurney. To which are subjoined Two Proclamations, Issued in consequence of the Result of those Proceedings. Though this edition is undated, because of the sensational nature of the trial, the presumption is that it would have been published during 1813.