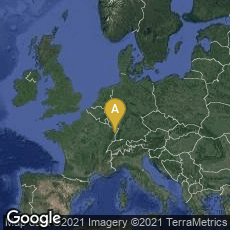 In 1820 Charles Xavier Thomas of Alsace, an entrepreneur in the insurance industry, invented the arithmometer, the first commercially produced adding machine, presumably to speed up and make more accurate, the enormous amount of daily computation insurance companies required. Remarkably, according to the Wikipedia, Thomas received almost immediate acknowledgement for this invention, as he was made Chevalier of the Legion of Honor only one year later, in 1821.  At this time he changed his name to Charles Xavier Thomas, de Colmar, later abbreviated to Thomas de Colmar.

"Initially Thomas spent all of his time and energy on his insurance business, therefore there is a hiatus of more than thirty years in between the first model of the Arithmometer introduced in 1820 and its true commercialization in 1852. By the time of his death in 1870, his manufacturing facility had built around 1,000 Arithmometers, making it the first mass produced mechanical calculator in the world, and at the time, the only mechanical calculator reliable and dependable enough to be used in places like government agencies, banks, insurance companies and observatories just to name a few. The manufacturing of the Arithmometer went on for another 40 years until around 1914" (Wikipedia article on Charles Xavier Thomas, accessed 10-10-2011).

The success of the Arithmometer, which to a certain extent paralleled Thomas's success in the insurance industry, was, of course, in complete contrast to the problems that Charles Babbage faced with producing and gaining any acceptance for his vastly more sophisticated, complex, ambitious and expensive calculating engines during roughly the same time frame. Thomas, of course, produced an affordable product that succeeded in speeding up basic arithmetical operations essential to the insurance industry while Babbage's scientific and engineering goals initially of making mathematical tables more accurate, and later, of automating mathematical operations in general, did not attempt to meet a recognized industrial demand.

"The [Arithmometer] mechanism has three parts, concerned with setting, counting, and recording respectively. Any number up to 999,999 may be set by moving the pointers to the numbers 0 to 9 engraved next to the six slots on the fixed cover plate. The movement of any of these pointers slides a small pinion with ten teeth along a square axle, underneath and to the left of which is a Leibniz stepped wheel.

"The Leibniz wheel, a cylinder having nine teeth of increasing length, is driven from the main shaft by means of a bevel wheel, and the small pinion is thus rotated by as many teeth as the cylinder bears in the plane corresponding to the digit set. This amount of rotation is transferred through one of a pair of bevel wheels, carried on a sleeve on the same axis, to the ‘results’ figure wheel on the back row on the hinged plate. This plate also carried the figure wheel recording the number of turns of the driving crank for each position of the hinged plate. The pair of bevel wheels is placed in proper gear by setting a lever at the top left-hand cover to either "Addition and Multiplication" or "Subtraction and Division." The ‘results’ figure wheel is thereby rotated anti-clockwise or clockwise respectively.

"Use. Multiplying 2432 by 598 may be performed as follows: Lift the hinged plate, turn and release the two milled knobs to bring all the figure wheels to show zero; lower the hinged plate in its position to the extreme left; set the number 2432 on the four slots on the fixed plate; set the lever on the left to "multiplication" and turn the handle eight times; lift the hinged plate, slide it one step to the right, and lower it into position; turn the handle nine times; step the plate one point to the right again and the turn the handle five times. The product 1,454,336 will then appear on the top row, and the multiplier 598 on the next row of figures" (From Gordon Bell's website, accessed 10-12-2011).