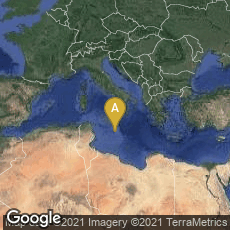 Image Source: www.raremaps.com
Lithographed world atlas published by the Church Missionary Society Press in Malta in 1835. This is the second, enlarged and expanded, edition of the first Arabic printed atlas.

Printing began in Malta in 1642, but was extremely limited, resulting in the survival of 16 imprints before 1756. From that date until the 1820s there was only one printing office in Malta, run by the Order of St. John, the rulers of the island until they were expelled by the French in 1798. In 1825 the English Church Missionary Society established a press in Malta to publish books in Arabic and Turkish for export rather than the Maltese market. These included Christian texts and also secular educational texts intended for Muslim, Christian and Jewish pupils in the new missionary schools and colleges of the Middle East. They also issued a periodical in the style of a newspaper.

Through 1842 this press issued over 150,000 books for distribution throughout the Middle East and Turkey.

"The role of the Malta press in standardising layouts and methods of presentation of printed Arabic texts had a significant impact. Some of the new features which it introduced correspond with several which Elizabeth Eisenstein mentioned, in her seminal work on the printing press as an agent of change, as significant in the systematisation of thought-processes in the formative era of European print culture. The use of title-pages engendered 'new habits of placing and dating' as well as helping the later development of new standards of cataloguing and enumerative bibliography. The use of footnotes, running heads and abbreviations, as well as Shidyaq's experiment's with punctuation, all served to 'reorder the thought of readers and to create a new 'esprit de système.'

"The plates and engravings in some of the Malta books also broke new ground. The views and story illustrations incorporated perspective, which was still a very new convention in Arab pictorial representation, and one which, as McLuhan and others have pointed out, implied a new reordering of concsciousness by the adoption of a fixed point of view. The lithographed diagrams, which accompanied an astronomical work published in Malta in 1833, were another important new feature of the Arabic book. Technical illustrations were sometimes found in Arabic manuscripts; but, as David James has aptly observed, 'in the absence of the printing press, transmission of technical data depends upon the accuracy of the scribe. The problem becomes doubly difficult when information has also to be communicated in the form of diagrams. . . . [which] were regarded by the copyists as little more than an exotic appendage, frequently misplaced and sometimes omitted.' With the introduction of standard, repeatable, engraved diagrams incorproated into printed books, the presentation of such information became transformed.

"In this the Malta press shared with the Bulaq press [founded in 1822] a pioneering role in the Arab world, and what was true of diagrams was equally true of printed maps, in which field the Malta atlas of 1835 also broke new gound. In Tunisia the first atlas was printed in 1860, in Egypt regular Arabic map printing did not begin until 1870, although copies of the Malta atlas itself were made there at an earlier date. . . ." (Roper 118-119).

Roper, "Arabic Books Printed in Malta 1826-42: Some Physical Characteristics," Sadgrove (ed) History of Printing and Publishing the the Languages and Countries of the Middle East (2005) 111-130, with illustrations.