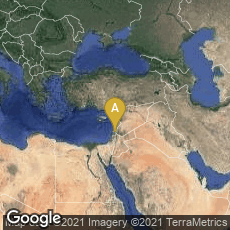 In 1832 Yisrael (Israel) Bak and his son Nissan opened a printing press in the town of Safed  (Safad) in northern Palestine (now Israel). This was the first press to operate in Palestine since about 1577.

"During the peasant revolt against Muhammad Ali in 1834 his printing press was destroyed and he was wounded. Later he reopened his press, and also began to work the land on Mount Yarmak (Meron), overlooking Safed. His was the first Jewish farm in Ereẓ Israel in modern times. After the Safed earthquake in 1837 and the Druze revolt in 1838, during which his farm and printing press were destroyed, he moved to Jerusalem. In 1841 he established the first – and for 22 years, the only – Jewish printing press in Jerusalem. One hundred and thirty books were printed on it, making it an important cultural factor in Jerusalem. Bak also published and edited the second Hebrew newspaper in Ereẓ Israel, Ḥavaẓẓelet  (1863)."

Ayalon, "The Beginnings of Publishing in pre-1948 Palestine," in Sadgrove (ed) History of Printing and Publishing in the Languages and Countries of the Middle East (2005) 69.