Image Source: artsandculture.google.com
First page of Fox Talbot's autograph manuscript for his paper. Preserved in the library of The Royal Society, London. 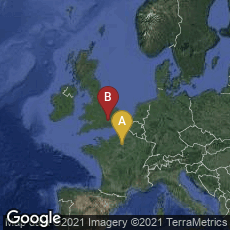 Upon learning about the exhibition of Daguerréotypes at the Académie des Sciences on January 7, 1839, English inventor William Henry Fox Talbot hastily read a paper on January 31 to the Royal Society entitled Some Account of the Art of Photogenic Drawing, or the Process by which Natural Objects may be made to Delineate Themselves with the Aid of the Artist's Pencil.

This paper, which Talbot had printed and distributed to friends as a pamphlet in February, 1839, was the first separate publication on photography.  In it Talbot suggested that fixed negatives might be used to produce multiple positive images.

In 1835 Talbot had developed a method of fixing negative images on paper previously made light-sensitive by successive coats of sodium chloride and silver nitrate, thus becoming the first to produce permanent paper negatives.