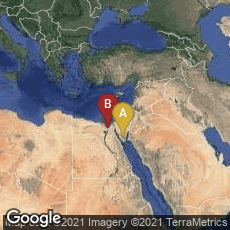 The complicated story of how German biblical scholar Constantin von Tischendorf discovered the Codex Sinaiticus, and acquired it for Russia in 1859, is tinged with romance, and has often been retold. The adventure is compatible in character with other nineteenth century acquisitions of priceless historical treasures—acquisitions that could probably never happen today— yet the story remains disputed and controversial.

While a Privatdocent at the University of Leipzig in 1845 Tischendorf made his first visit to the extremely remote Monastery of Saint Catherine on Mount Sinai in Egypt, one of the oldest working Christian monasteries in the world. This meant traveling hundreds of miles through the Egyptian desert from Cairo to Mt. Sinai on the back of a camel, so a scholar like Tischendorf had to be somewhat of an adventurer even to undertake the journey. The monastery was built in the mid-6th century by order of Emperor Justinian I, enclosing the Chapel of the Burning Bush (also known as "Saint Helen's Chapel") ordered to be built by Helena, the mother of Constantine I, at the site where Moses is supposed to have seen the burning bush. The living bush on the grounds is purportedly the one seen by Moses. The site is sacred to Christianity and Islam.

At the monastery Tischendorf saw some leaves of parchment in a waste-basket. He retrieved from the basket 129 leaves in an early Greek uncial majuscule hand, which he identified as coming from a manuscript of the Septuagint. According to his account, the monks indicated that they had already used a number of similar leaves to stoke their fires. To which Tischendorf responded that the leaves were too valuable to be burned. Whether the monks had actually burned any of the leaves is seriously disputed by the current occupants of the Monastery of Saint Catherine. Unfortunately, there is no way for us to know whether or not Tischendorf's assertion was accurate. He asked if he might keep the leaves he pulled out of the wastebasket, but the monks, having been made aware of their value and significance, permitted Tischendorf to take only 43 leaves. These leaves contained portions of 1 Chronicles, Jeremiah, Nehemiah, and Esther. Tischendorf later deposited them in the Leipzig University Library, where they remain. In 1846 Tischendorf published the content of the 43 leaves, naming them the Codex Frederico-Augustanus in honor of the his patron and sovereign, Frederick Augustus, the king of Saxony.

Eight years later, hoping to find more leaves from the same codex, in 1853 Tischendorf made another expedition to the monastery, but after the excitement which he had displayed in his first visit, the monks were cautious and let him leave with nothing, even after his arduous journey. Never one to concede easily, Tischendorf undertook a third journey to Saint Catherine's in 1859, this time under the auspices of tsar Alexander II of Russia. Tischendorf reached the remote monastery on January 14, and once again found nothing. On February 4, the day before he was scheduled to return to Cairo by camel, he presented to the steward of the monastery a copy of the edition of Septuagint that he had recently published in Leipzig. In response the steward remarked that he too had a copy of the Septuagint, and produced from the closet of his cell a manuscript wrapped in red cloth. Amazingly, this was the Codex Sinaiticus.

In Cairo Tischendorf visited a small monastery in the city that was also operated by the monks on Sinai. There he impuned the abbot of the monastery of St. Catherine, who happened to be in Cairo, to send for the manuscript. To this the abbot agreed and sent Bedouin messengers to fetch the manuscript and deliver it to Cairo. Once the manuscript was in Cairo it was agreed that Tischendorf could examine one quire of eight leaves at a time for the purposes of copying the text. With the help of two Germans who happened to be in Cairo and knew Greek, and an apothecary, and a bookseller, all 110,000 lines of text in the manuscript were transcribed in two months, and carefully revised by Tischendorf.

A well-documented summary of Tischendorf's discovery is in Metzger & Ehrman, The Text of the New Testament. Its Transmission, Corruption and Restoration. 4th ed (2005) 62-67. From this I quote from pp. 64-64:

"The next stage of the negotiations involved what may be called euphemistically 'ecclesiastical diplomacy.' At that time, the highest place of authority among the monks of Sinai was vacant. Tischendorf suggestioned that it would be to their advantage if they made a gift to the czar of Russia, whose influence, as protector of the Greek Church, they desired in connection with the election of the new abbot—and what could be more appropriate as a gift than this ancient Greek manuscript! After prolonged negotiations, the precious codex was delivered to Tischendorf for publication at Leipzig and for presentation to the czar in the name of the monks. In the east a gift demands a return (see Genesis 23, where Ephron 'gives' a Abraham a field for a burying plot but nevertheless Abraham pays him 400 shekels of silver for it). In return for the manuscript the czar presented to the monastery a silver shrine for St. Cartherine, a gift of 7,000 rubles for the library at Sinai, a gift of 2,000 rubles for the monastery in Cairo, and several Russian decorations (similar to honorary degrees for the authorities of the monastery. In 1862, on the thousandth anniversary of the founding of the Russian Empire, the text of the manuscript was published in magnificent style at the expense of the czar in four folio volumes, being printed at Leipzig with type cast for the purpose so as to resemble the characters of the manuscript, which it represents line for line with the greatest possible accuracy."

Metzer and Ehrman qualified their account of the transaction with a long footnote, indicating that "certain aspects of the negotiations leading to the transfer of the codex to the czar's possession are open to an intepretation that reflects adversely upon Tischendorf's candor and good faith with the monks at St. Catherines's." In particular they cite Erhard Lauch, "Nichts gegen Tischendorf," Bekenntnis zur Kirche: Festgabe für  Ernst Sommerlath zum 70 Geburtstag (Berlin, c. 1961) pp. 15-24 "for an account that includes a hitherto unknown receipt given by Tischendorf to the authorities at the monastery promising to return the manuscript from St. Petersburg "to the Holy Confraternity of Sinai at its earliest request."  A more popular, but scholarly account is is James Bentley's Secrets of Mount Sinai. The Story of Finding the World's Oldest Bible—Codex Sinaiticus (1986). This well-illustrated study reflects bias against Tischendorf.

♦ As kind of a side show, in 1862 Constantine Simonides, a forger of manuscripts who had been exposed by Tischendorf, by way of revenge made the claim in print in The Guardian that he had written the codex himself as a young man in 1839. Simonides claims were refuted by bibliographer Henry Bradshaw. This incident I deal with in an entry for 1862-63.

♦ "In 1931 Ernest Maggs had travelled to the Soviet Union with a colleague, Maurice Ettinghausen, who was both a bookseller and a scholar. When they saw the priceless Codex Sinaiticus, Ettinghausen remarked to his hosts, “If you ever want to sell it, let me know." Some time later, Maggs received a postcard saying that the Soviet government would be prepared to sell the Codex Sinaiticus for 200,000 pounds. The British group countered with 40,000 pounds. Finally, a price of 100,000 pounds was agreed upon. This was the largest price that had ever been paid for a book. It was an enormous sum at the time. [In 1933] The British government agreed to pay half the amount and guaranteed the remainder if it were not raised by public subscription." (Wikipedia article on Maggs Bros., accessed 08-02-2009).

"Some preliminary negotiations were under way with Amtorg [in 1932] for the Codex Sinaiticus, the fourth-century manuscript of the Bible which had been in Russia since its discoverer, Tischendorf, acquired it for the Czar in 1869, and which the Communists, interested in neither its contents nor its provenance, wanted to sell. It was a volume before which the the Doctor's flow of words was inadequate. It was simply the most important, exciting, and valuable book in existence; except for fragments, it was one of the three oldest manuscripts of the Bible known. To have handled it would have added luster to any reputation. In the dickering stage, Dr. Rosenbach told the Russians that the asking price of $1,600,000 was too high, but he hung on the fringes of the deal by assuring them in confidence, 'that I might interest some of our wealthy clients in its purchase for presentation purposes, if the price could be lowered considerably.'

"Ah, perfidious Moscow! Before the end of the next year Ramsay MacDonald announced the purchase of the Codex by the British Museum for £100,000. The news found the Doctor astonished and disappointed. It had been offered to him for $1,250,000, he told the Herald Tribune, and he could not understand how the British Museum had obtained it for less than half that figure. . . ."

[In July 2008 it was stated on the Codex Sinaiticus website that the "recent" history of the manuscript would be revised in light of previously unavailable documents.]