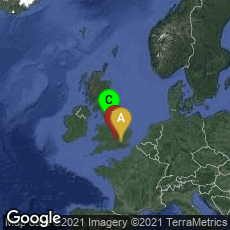 In 1866 English mathematician and economist William Stanley Jevons, working at the University of Manchester, constructed his “logical piano,” the first logic machine to solve complicated problems with superhuman speed. Jevons described his machine in "On the mechanical performance of logical inference," Philosophical Transactions of the Royal Society 160 (1870), 497-518 with 3 plates.

First demonstrated before the Royal Society in 1870, the original logical piano is still on display in the Museum of the History of Science, Oxford. The internal structure of the machine is illustrated in the three plates accompanying Jevons' paper, which provide a reasonable guide to its construction. Jevons was a pioneer of symbolic logic, and his paper includes a detailed explanation of his system of equational logic, which derived from (and in some important ways improved) the symbolic logic devised by Boole over two decades earlier.