Section of the excavation of Troy reproduced from the Wikipedia. 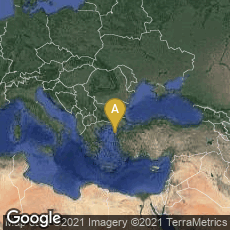 Archaeological plan of Troy reproduced from the Wikipedia.

Although many scholars believed that events in the Trojan War, as recorded in the Iliad, were non-historical, German archaeologist Heinrich Schliemann disagreed. From 1871 to 1873 he excavated a hill, called Hisarlik (Hissarlik) by the Turks, near the town of Chanak in north-western Anatolia. There he discoversed the ruins of a series of ancient cities, dating from the Bronze Age to the Roman period.

From this excavation and another in 1878-79, Schliemann declared one of these cities—at first Troy I, later Troy II—to be the city of Troy. This identification became widely accepted. Later excavations showed that at least nine cities were built, one on top of the other, at this site.