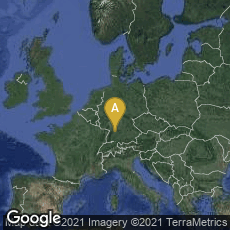 In 1885 German engineer, industrial designer and industrialist Gottlieb Daimler invented the internal combustion engine, and with his business partner the engine designer and industrialist  Wilhelm Maybach fitted this to a two-wheeler— the first internal combustion motorcycle. In 1886 Daimler and Maybach fitted the engine to a stagecoach, and a boat. Daimler baptized it the Grandfather Clock engine (Standuhr) because of its resemblance to an old pendulum clock.

Also 1885 Daimler and Maybach built the first carburetor, which mixed evaporated gasoline with air to allow its efficient use as fuel. It was used that year on a larger but still compact version of the engine, now with a vertical cylinder, that featured: