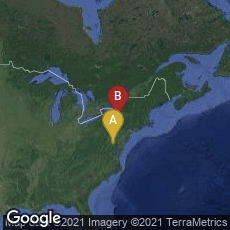 "The results of a tabulation are displayed on the clock-like dials. A sorter is on the right. On the tabletop below the dials are a Pantographic card punch (explained below) on left and the card reading station ("press") on the right, in which metal pins pass through the holes, making contact with little wells of mercury, completing an electrical circuit. All of these devices are fed manually, one card at a time, but the tabulator and sorter are electrically coupled" (http://www.columbia.edu/cu/computinghistory/census-tabulator.html).

In 1882 physician John Shaw Billings, at the U.S. Census Bureau, suggested to statistician Herman Hollerith that there ought to be a machine for speeding up the process of tabulating population and similar statistics. Billings was founder and librarian of the Surgeon General's Library (now the National Library of Medicine).

"These patents described both paper tape and rectangular cards as possible recording media. The card shown in U.S. Patent 395,781 of June 8 was preprinted with a template and had holes arranged close to the edges so they could be reached by a railroad conductor's ticket punch, with the center reserved for written descriptions. Hollerith was originally inspired by railroad tickets that let the conductor encode a rough description of the passenger:

"I was traveling in the West and I had a ticket with what I think was called a punch photograph...the conductor...punched out a description of the individual, as light hair, dark eyes, large nose, etc. So you see, I only made a punch photograph of each person."

"Use of the ticket punch proved tiring and error prone, so Hollerith invented a pantograph 'keyboard punch' that allowed the entire card area to be used. It also eliminated the need for a printed template on each card, instead a master template was used at the punch; a printed reading board could be placed under a card that was to be read manually. Hollerith envisioned a number of card sizes. In an article he wrote describing his proposed system for tabulating the 1890 U.S. Census, Hollerith suggested a card 3 inches by 5½ inches of Manila stock "would be sufficient to answer all ordinary purposes."

"The cards used in the 1890 census had round holes, 12 rows and 24 columns. A reading board for these cards can be seen at the Columbia University Computing History site. At some point, 31⁄4 by 73⁄8 inches (82.550 by 187.325 mm) became the standard card size, a bit larger than the United States one-dollar bill of the time (the dollar was changed to its current size in 1929). The Columbia site says Hollerith took advantage of available boxes designed to transport paper currency. Hollerith's original system used an ad-hoc coding system for each application, with groups of holes assigned specific meanings, e.g. sex or marital status. Later designs standardized the coding, with twelve rows, where the lower ten rows coded digits 0 through 9. This allowed groups of holes to represent numbers that could be added, instead of simply counting units " Wikipedia article on Punched Cards, accessed 12-21-2011).

Hollerith's electric punched card tabulator was used in the 1890 United States census — the first major data-processing project to use electrical machinery. It reduced data-processing time by 80 percent over manual methods.

In 1896 Hollerith founded the Tabulating Machine Company, the world's first electric tabulating and accounting machine company. According to Alex Wright, Cataloguing the World: Paul Otlet and the Birth of the Information Age (2014) 42 in the spring of 1896, Hollerith and Melvil Dewey agreed on a three-year partnership under which Dewey's Library Bureau would supply cards and cabinets to commercial and government customers who used Hollerith's tabulating equipment.

The next significant improvement that Hollerith made was the addition an automatic card feed to his electric punched card tabulating machine. This sped up processing of the 1900 census.