Interior view of Kinetoscope with peephole viewer at top of cabinet. 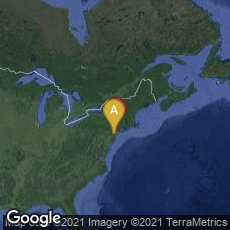 The First Motion Picture Shot in the United States Sheet of images from one of the three Monkeyshines films (ca. 1889–90) produced as tests of an early version of the Kinetoscope.

In 1894 Thomas Edison of Menlo Park (now Edison), New Jersey formally introduced the Kinetograph, the first practical moving picture camera, and the Kinetoscope, a hand-cranked, single-viewer, lighted box to display the resulting films. This group of inventions was for the most part developed by Edison's employee, William Kennedy Laurie Dickson.

The first surviving experimental films Edison's group produced were Monkeyshines, No. 1 shot by Dickson and William Heise as early as 1889 or 1890:

"Scholars have differing opinions on whether the first was shot in June 1889 starring John Ott or sometime between November 21-27, 1890 starring G. Sacco Albanese. Both men were fellow lab workers at the company; contradictory evidence exists for each laim. Monkeyshines, No. 2 and Monkeyshines, No. 3 quickly followed to test further conditions" (Wikipedia article on Monkeyshines, accessed 01-19-2014).

"In 1888, American inventor and entrepreneur Thomas Alva Edison conceived of a device that would do 'for the Eye what the phonograph does for the Ear'. In October, Edison filed a preliminary claim, known as a caveat, with the U.S. Patent Office outlining his plans for the device. In March 1889, a second caveat was filed, in which the proposed motion picture device was given a name, the Kinetoscope. Dickson, then the Edison company's official photographer, was assigned to turn the concept into a reality.

"Dickson invented the first practical celluloid film for this application and decided on 35 mm for the size, a standard still used.

"Dickson and his team at the Edison lab then worked on the development of the Kinetoscope for several years. The first working prototype was unveiled in May 1891 and the design of system was essentially finalized by the fall of 1892. The completed version of the Kinetoscope was officially unveiled at the Brooklyn Institute of Arts and Sciences on 9 May 1893. Not technically a projector system, it was a peep show machine showing a continuous loop of the film Dickson invented, lit by an Edison light source, viewed individually through the window of a cabinet housing its components. The Kinetoscope introduced the basic approach that would become the standard for all cinematic projection before the advent of video. It creates the illusion of movement by conveying a strip of perforated film bearing sequential images over a light source with a high-speed shutter. Dickson and his team also devised the Kinetograph, an innovative motion picture camera with rapid intermittent, or stop-and-go, film movement, to photograph movies for in-house experiments and, eventually, commercial Kinetoscope presentations" (Wikipedia article on William Kennedy Dickson, accessed 02-15-2013).

In June 1894 Dickson and his sister Antonia published "Edison's Invention Of The Kineto-Phonograph" in Century Magazine, and the following year they published History of the Kinetograph, Kinetoscope and Kinetophonograph. In 2001 the Museum of Modern Art published a facsimile edition of Dickson's own annotated copy of this 55-page pamphlet.