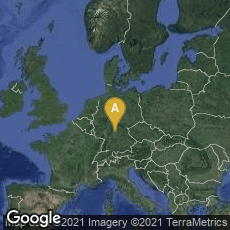 Image Source: en.wikipedia.org
Hand mit Ringen (Hand with Rings). Print of Wilhelm Röntgen's first  X-ray, of his wife's hand, taken on 22 December 1895 and presented to Ludwig Zehnder of the Physik Institut, University of Freiburg, on 1 January 1896

Because physicist Wilhelm Conrad Röntgen had his lab notes burned after his death, there are conflicting accounts of the discovery of X-rays, but this is a likely reconstruction: while investigating cathode rays with a fluorescent screen painted with barium platinocyanide and a Crookes tube, which he had wrapped in black cardboard so the visible light from the tube wouldn't interfere, Röntgen, then teaching at the University of Würzburg, noticed a faint green glow from the screen, about one meter away. The invisible rays coming from the tube to make the screen glow were passing through the cardboard. He found they could also pass through books and papers on his desk. These events probably occurred on November 8, 1895.

Upon investigation Röntgen found that the fluorescence was caused by unknown rays, originating from the spot where cathode rays hit the glass wall of the vacuum tube. These unknown rays he temporarily designated X-rays.

In his initial report on the discovery Röntgen described the rays' photographic properties and their amazing ability to penetrate all substances, even living flesh. Although he was unable to determine the true physical nature of the rays, Röntgen was certain that he had discovered something entirely new.  He published his initial report, "Eine neue Art von Strahlen," in the relatively obscure Sitzungs-Bericht der physiikalisch-medicinischen Gesellschaft zu Würburg at the end of December 1895. The advantage of publishing in this obscure journal was that Röntgen obtained extremely rapid publication. The publishers of the journal issued offprints of the paper for commercial sale. These offprints went through several printings, reflecting unusually wide interest in the discovery from the international scientific and medical community. X-rays were among the most rapidly adopted and exploited scientific discoveries. Within a year roughly 1000 publications appeared on the subject.

For this discovery Röntgen received the first Nobel Prize in Physics in 1901.