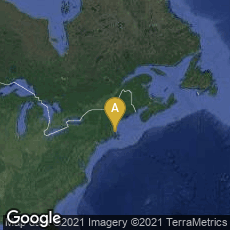 On December 23, 1900 Canadian-American physicist Reginald A. Fessenden was the first to transmit human speech over radio waves using a spark-gap transmitter from his transmitter at Brant Rock, Massachusetts.  He said:

“One, two, three, four, is it snowing where you are Mr. Thiessen? If it is, would you telegraph back to me?”

Fessenden’s voice was the first ever to be transmitted by radio waves and heard by another person.