Diagrams from Zuse's May 1936 patent for a binary switching element using a mechanism of flat sliding rods. 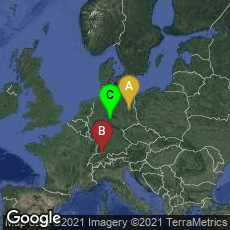 Reconstruction, or complete replica, of the Z1 computer built by Zuse and three associates between 1986 and 1989. Deutsche Technikmuseum, Berlin. The original computer was destroyed.

Konrad Zuse made numerous original contributions to computer design and software that predated American and English developments, but because Zuse worked in Nazi Germany his ideas were unknown outside of Germany until well after World War II, and thus had no influence on the development of the computer industry in America and England. While completing his engineering degree at the Technische Universität Berlin in 1934, Zuse realized that an automatic calculator would need only a control, a memory, and an arithmetic unit. On April 11, 1936 Zuse applied for a patent on his electromagnetic, program-controlled calculator, called the Z1, which he built in the living room of his parents’ apartment in Berlin. Zuse completed the ZI, which had 30,000 parts, in 1938. Independently of Claude Shannon, Zuse developed a form of symbolic logic to assist in the design of the binary circuits.

The Z1 was the first freely programmable, binary-based calculating machine ever built, but it did not function reliably, and it was destroyed in World War II. Zuse's patent application is the only surviving documentation of Zuse's prewar work on computers. Between 1986 and 1989 Zuse and three associates created a replica of the Z1, which is preserved in the Deutsche Technikmuseum, Berlin.

With his associate Helmut Schreyer, Zuse began work on his Z2 shortly after completing the Z1. In 1939 the men completed the Z2 machine in Berlin. It used the same kind of mechanical memory as the Z1, but used 800 relays in the arithmetic and control units. On October 15, 1939 Helmut Schreyer wrote a memorandum concerning the Z2, Rechnische Rechenmachine (unpublished at the time), in which he stated that it would be possible to build a computer with vacuum tubes that would process “10,000 operations per second.” This memorandum and the rest of Zuse's and Schreyer's ideas only became known in the west after World War II.

"The S2 featured an integrated analog-to-digital converter under program control, making it the first process-controlled computer. These machines contributed to the Henschel Werke Hs 293 and Hs 294 guided missiles developed by the German military between 1941 and 1945, which were the precursors to the modern cruise missile. The circuit design of the S1 was the predecessor of Zuse's Z11. Zuse believed that these machines had been captured by occupying Soviet troops in 1945" (Wikipedia article on Konrad Zuse, accessed 03-03-2012).

Continuing to work in Berlin, with the assistance of Helmut Shreyer, Zuse completed his Z3 machine on May 12, 1941. This was the world’s first fully functional Turing-complete electromechanical digital computer—with twenty-four hundred relays. The Z3 ran programs punched into rolls of discarded movie film. In 1944 it was destroyed in bombing raids. Also in 1941 Schreyer received his doctorate in telecommunications engineering from the Technische Universität Berlin with a dissertation on the use of vacuum-tube relays in switching circuits. Schreyer converted Zuse’s logical designs into electronic circuits, building a simple prototype of an electronic computer with 100 vacuum tubes, which achieved a switching frequency of 10,000 Hz. Because no one outside of Germany had any knowledge of the Z3, Zuse's design had no influence on the development of computing in the the United States or England during or after World War II. In 2012 there was a replica of the Z3 on display in the Deutsches Museum, Munich.

In 1942 Zuse started work on the Z4 electromechanical computer in Berlin, completing the work shortly before V-E Day in 1945. Built by his company, Zuse Apparatebau, the Z4 was the world's first commercial digital computer. To safeguard it against bombing, the machine was dismantled and shipped from Berlin to a village in the Bavarian Alps. In 1950 it was refurbished, modified, and installed at ETH in Zurich. For several years it was the only working electronic digital computer in continental Europe, and it remained operational in Zurich until 1955. It is preserved in the Deutsches Museum in Munich.

"The Z4 was very similar to the Z3 in its design but was significantly enhanced in a number of respects. The memory consisted of 32-bit rather than 22-bit floating point words. A special unit called the Planfertigungsteil (program construction unit), which punched the program tapes made programming and correcting programs for the machine much easier by the use of symbolic operations and memory cells. Numbers were entered and output as decimal floating point even though the internal working was in binary. The machine had a large repertoire of instructions including square root, MAX, MIN and sign. Conditional tests included tests for infinity. When delivered to ETH Zurich the machine had a conditional branch facility added and could print on a Mercedes typewriter. There were two program tapes where the second could be used to hold a subroutine (originally six were planned).

"In 1944 Zuse was working on the Z4 with around two dozen people, including several women. Some engineers who worked at the telecommunications facility of the OKW also worked for Zuse as a secondary occupation. To prevent it from falling into the hands of the Soviets, the Z4 was evacuated from Berlin in February 1945 and transported to Göttingen. The Z4 was completed in Göttingen in a facility of the Aerodynamische Versuchsanstalt (AVA, Aerodynamic Research Institute), which was headed by Albert Betz. But when it was presented to scientists of the AVA the roar of the approaching front could already be heard, so the computer was transported with a truck of the Wehrmacht to Hinterstein in Bad Hindelang, where Konrad Zuse met Wernher von Braun" (Wikipedia article on Z4, accessed 01-01-2015).

For the Z4 Zuse developed Plankalkül, the first "high-level" non-von Neumann programming language. Some of his earliest notes on the topic date to 1941. The language was well-developed by 1945. Because of war time secrecy, and Zuse's efforts to commercialize the Z3 computer and its sucessors, Zuse did not publish anything on Plankalkühl at the time he developed it. Zuse wrote a book on the subject in 1946 but this remained unpublished until it was edited many years later for Internet publication. In 1948 he published a summary paper,  "Über den Allgemeinen Plankalkül als Mittel zur Formulierung schematisch-kombinativer Aufgaben", Archiv der Mathematik I (1948) 441-449. However, this did not attract much attention.

" . . . for a long time to come programming a computer would only be thought of as programming with machine code. The Plankalkül was eventually more comprehensively published in 1972 and the first compiler for it was implemented in 1998. Another independent implementation followed in the year 2000 by the Free University of Berlin" (Wikipedia article on Plankalkühl, accessed 12-04-2011).

Because of his Nazi affiliation Zuse was not allowed to get back into the computer industry until the 1950s. In 1958 he produced the Z22, the first commercial electronic digital computer produced in Germany. The Z22 used vacuum tubes—a relatively late date for that technology, as most American computer companies switched to solid state by 1957. Zuse's company, Zuse KG, became the first independent German electronic computer company. It was eventually purchased by Siemens.