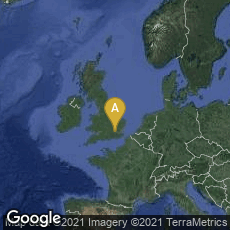 In a paper entitled "Sources of Information on Specific Subjects," (Engineering 137 [1934], 85-6), British mathematician, librarian and documentalist at the Science Museum in London Samuel C. Bradford published Bradford's Law, also known as  "Bradford's law of scattering" and as the "Bradford distribution," showing the "exponentially diminishing returns of extending a library search."

"In many disciplines this pattern [described by Bradford's Law] is called a Pareto distribution. As a practical example, suppose that a researcher has five core scientific journals for his or her subject. Suppose that in a month there are 12 articles of interest in those journals. Suppose further that in order to find another dozen articles of interest, the researcher would have to go to an additional 10 journals. Then that researcher's Bradford multiplier bm is 2 (i.e. 10/5). For each new dozen articles, that researcher will need to look in bm times as many journals. After looking in 5, 10, 20, 40, etc. journals, most researchers quickly realize that there is little point in looking further.

"Different researchers have different numbers of core journals, and different Bradford multipliers. But the pattern holds quite well across many subjects, and may well be a general pattern for human interactions in social systems. Like Zipf's law, to which it is related, we do not have a good explanation for why it works. But knowing that it does is very useful for librarians. What it means is that for each specialty it is sufficient to identify the core publications' for that field and only stock those. Very rarely will researchers need to go outside that set" (Wikipedia article on Bradford's Law, accessed 02-21-2012).