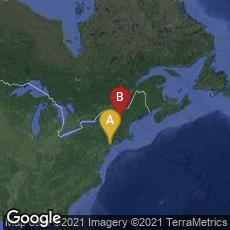 George Stibitz (from the Wikipedia)

In November 1937 George Stibitz, a research mathematician at Bell Telephone Labs in New York City, built a binary adder out of a few light bulbs, batteries, relays and metal strips cut from tin cans on his kitchen table. This device was similar to a theoretical design described a few months earlier by Claude Shannon in his master's thesis. Stibitz's "Model K" (for “Kitchen”), was the first electromechanical computer built in America.

In 1939 Stibitz and Samuel Williams of Bell Labs in New York City began construction of the Complex Number Calculator (later known as the Bell Labs Model I). This machine was called “the first electromechanical computer for routine use.” It used telephone relays and coded decimal numbers as groups of four binary digits (bits) each.

On January 8, 1940 the Complex Number Calculator was operational. On September 11 the machine, located in New York, was demonstrated via a remote teletype terminal at the American Mathematical Association Meeting in Dartmouth College, New Hampshire. This was the first demonstration of remote computing. At the demonstration mathematician Norbert Wiener, and physicist John Mauchly spent a lot of time experimenting with the system.

Inspired by the demonstration of remote computing using Wiener sent a letter to Vannevar Bush enclosing a “Memorandum on the Mechanical Solution of Partial Differential Equations.” This outlined a machine that had all the features of an electronic digital computer except for a stored program. The memorandum was not published until it appeared in Wiener’s Collected Works issued from 1976 to 1984.

On October 8, 1941 mathematician and computing pioneer Edmund C. Berkeley, an actuary at the Prudential Insurance Company in Boston, wrote a report on the possible application of Stibitz’s Complex Number Calculator for insurance-company calculations. This was one of the earliest reports on the application of an electromechnical computer in industry.