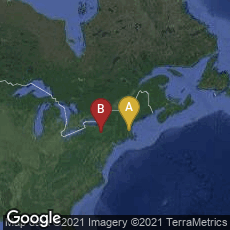 American computing pioneer Howard H. Aiken first conceived of building a powerful, large-scale calculating machine in 1935 while pursuing graduate studies in physics at Harvard University. In 1937, after Aiken had become a professor of applied mathematics at Harvard's Graduate School of Engineering, he proposed his idea to a number of calculating-machine manufacturers, drafting a proposal for an automatic calculating machine, and receiving several rejections before finally convincing IBM to undertake the project. The project, known initially as Automatic Sequence Controlled Calculator (ASCC), and later called the Harvard Mark I, was partly funded by money from the United Statses Navy; the remainder came from IBM, whose president, Thomas J. Watson, viewed the undertaking as good publicity and as a showcase for IBM's talents.

Aiken's machine began construction in May 1939 at IBM's North Street Laboratory in Endicott, New York. The chief engineers on the project were Clair D. Lake, James W. Bryce, Francis E. Hamilton, and Benjamin Durfee; these men were responsible for translating Aiken's design ideas into workable machinery, and Aiken never hesitated to acknowledge them as co-inventors of the Mark I. To give the machine a beautiful appearance, Watson commissioned the avant-garde industrial designer Norman Bel Geddes to design a metal cabinet for the machine. Geddes's work gave the machine a very modernistic look. By January 1943  the machine was operational at IBM Endicott Labs under wartime security. The completed electromechanical calculating machine weighed five tons.

Construction of the Mark I was completed in early 1943, and a year later the machine was dismantled and shipped to Harvard, where it became operational in May 1944. he electromechanical machine solved addition problems in less than a second, multiplication in six seconds, and division in 12 seconds. Grace Hopper wrote some of its first programs, which ran on punched tape.The machine was officially presented to Harvard by IBM at a dedication ceremony held on August 7. Unfortunately, the press release announcing the event slighted IBM by describing Aiken as the machine's sole inventor, ignoring the crucial role IBM had played in its creation. This regrettable faux pas infuriated Watson, who was in attendance at the ceremony, and put an end to any hopes of a continuing partnership between IBM and Harvard.

In 1945, probably in October, Aiken published Tables of the Modified Hankel Functions of Order One-Third and of their Derivatives. These tables, calculated by the Harvard Mark I were the first published mathematical tables calculated by a programmed automatic computer, finally fulfilling the dream of Charles Babbage, first expressed in 1822. Calculating these tables required the equivalent of forty-five days of computer processing time on the Mark I. Prior to the Mark I, calculating the tables would have required years of human computation.

In 1946 Aiken and Grace Hopper published A Manual of Operation for the Automatic Sequence Controlled Calculator. The instruction sequences scattered throughout this volume on the Harvard Mark I were among the earliest published examples of digital computer programs. Aiken saw himself as Babbage's intellectual successor, and in an excellent historical introduction to this technical manual he and Hopper placed the Harvard Mark I in its historical context.  The introduction began with the following quotation from Babbage's autobiography (1864):

"If, unwarned by my example, any man shall undertake and shall succeed in really constructing an engine embodying in itself the whole of the executive department of mathematical analysis upon different principles or by simpler mechanical means, I have no fear of leaving my reputation in his charge, for he alone will be fully able to appreciate the nature of my efforts and the value of their results."

I. B. Cohen, in his biography of Aiken, Portrait of a Computer Pioneer (2000) pointed out that Aiken was not well informed about the actual design of Babbage's Analytical Engine when he was designing the Mark I; otherwise Aiken would have included conditional branch facilities in its original design. Before designing the machine Aiken seems to have read Babbage's autobiography rather than the posthumous Babbage's Calculating Engines, in which more details of the design of the Analytical Engine were given. An imposing thick quarto with large photographs of the very modernistic looking Mark I, this technical volume full of computer programs must have been perceived as radically new when it was published. The computer historian Paul Ceruzzi implies as much in the following description:

"[The Harvard Mark I] manual was a milepost that marked the state of the art of machine computation at one of its critical places: where, for the first time, machines could automatically evaluate arbitrary sequences of arithmetic operations. Most of this volume (pp. 98-337, 406-557) consists of descriptions of the Mark I's components, its architecture, and operational codes for directing it to solve typical problems. . . . The Manual is one of the first places where sequences of arithmetic operations for the solution of numeric problems by machine were explicitly spelled out. It is furthermore the first extended analysis of what is now known as computer programming since Charles Babbage's and Lady Lovelace's writings a century earlier. The instruction sequences, which one finds scattered throughout this volume, are thus among the earliest examples anywhere of digital computer programs" (Ceruzzi 1985, xv-xvii).

The Mark I was an electromechanical machine, based largely on existing IBM punched-card technology. Paul Ceruzzi, in his introduction to the 1985 reprint of the Mark I's manual, described it as follows:

"The architecture of the Mark I was unlike that of any modern computer. Its basic units were a set of seventy-two accumulators that could both store and add 23-digit signed decimal numbers. There was no clear separation of the storage and arithmetic functions. Besides the accumulators there were sixty constant registers whose contents could be read but not altered during a program run, a multiply-divide unit, and paper tape readers for reading numbers and sequences of operations. . . ."

"The basic computing element of the Mark I was a multipole rotary switch, connected by a clutch to a drive shaft, by which decimal units, carry, and timing information were stored. Banks of twenty-four switches (holding twenty-three decimal digits and the sign of a number), made up one accumulator. The drive shaft rotated continuously; electrically activated clutches engaged the wheels of an accumulator whenever a number was to be transferred. The clutches were in turn driven by double-throw relays. The Mark I was an electromechanical calculator: it held numbers in mechanical elements (the rotary switches), which were electrically controlled (by the clutch relays). Electrical pulses traveling along a common bus conveyed numbers to and from the accumulators. . . . Getting the Mark I to execute a desired sequence of operations involved a combination of two processes: preparing a sequence tape fed into the Sequence Control Unit (coding) and plugging cables into plugboards located at several places on the machine (setup). . . . The Sequence Tape reader had no provision for backing up the tape or for skipping steps. This meant that the Mark I executed only simple, linear sequences of instructions. Sequence (and Value) tapes could be cemented into endless loops, however, and this was frequently done. After 1947 a Subsidiary Sequence mechanism was attached to the Calculator that allowed such endless loops of tape to supply sub-sequences to the main sequence control (Ceruzzi 1985, xxi-xxvi).

After the Mark I was set up at Harvard in 1944 it was immediately commandeered for war work by the United States Navy. Aiken, a commander in the United States Naval Reserve (USNR), was put in charge of the navy's computation project, and he later joked that he was first naval officer ever to command a computer. Most of Aiken's staff at the Computation Laboratory also held commissions in the USNR. One of these was Lieutenant (later Admiral) Grace M. Hopper, a mathematician who, in her own words, had "never met a digit" until joining the Computation Laboratory (quoted in Ceruzzi 1985, xviii); she would go on to become one of the most famous of the postwar computer pioneers, making fundamental contributions to the development of the first compilers. Hopper's biography has always taken a second place to Aiken's. Until March 26, 2019, for example I was completely unaware that Hopper received a PhD in mathematics from Yale. On that date the Yale News published an article by Kendall Teare entitled Math—not computer science—was Grace Hopper's first language. This article, with a link to a digital facsimile of Hopper's dissertation, helped to explain how Hopper was able to create programs that had virtually no precursors for a machine that had virtually no precursors. More detail, additional images, and a bibliography is available in the article by Asher Auel entitled "The Mathematics of Grace Murray Hopper" published in Notices of the American Mathematical Society, 66, number 3 (2019).

The operating manual for the Mark I calculator - published as Volume 1 of the Annals of the Computation Laboratory of Harvard University - was written largely by Hopper, who was the chief author of chapters 1-3 and the eight appendices following chapter 6. Chapters 4 and 5 were written by Aiken and Robert Campbell, and chapter 6, containing directions for solving sample problems on the machine, was primarily the work of Brooks J. Lockhart.

Hook & Norman, Origins of Cyberspace, no. 411 and other entries.