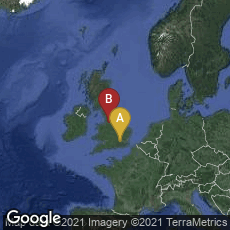 Alan Turing's report: 'Proposed electronic calculator' (ACE). A report on the detailed design of an electronic computer and account of its operation, written as an employee of the National Physical Laboratory. 1946. Part of the records of the Public Record Office, Kew (ref.: DSIR 10/385).

About October 1945 Alan Turing arrived at the National Physical Laboratory,Teddington, England, to work on the Automatic Computing Engine (ACE). There Turing prepared a typed proposal, “Proposed electronic calculator,” outlining the development of the ACE. This was at the same time that John von Neumann's First Draft of a Report on the EDVAC was circulated, in which von Neumann described what came to be known as the von Neumann architecture. Turing's report entitled Proposed Electronic Calculator described in engineering and programming detail his idea of a machine he called the Automatic Computing Engine (ACE). Turing presented this report to the Executive Committee of the British National Physical Laboratory on February 19, 1946. Although Turing knew from his wartime experience at Bletchley Park that what he proposed was feasible, the secrecy surrounding Colossus that was subsequently maintained for several decades prevented him from saying so. Various successful implementations of the ACE design were produced.

The electronic computer design that Turing proposed was essentially the same as what came to be known as the von Neumann architecture, and had Turing been able to publish his description of the Proposed Electronic Calculator it is possible that the von Neumann Architecture would have been named the Turing Architecture instead. In a lecture on February 20, 1947 to the London Mathematical Society that remained unpublished until 1986 Turing stated that “digital computing machines such as the ACE. . . are in fact practical versions of the universal machine,” i.e. the Turing machine that he had described in 1936.

First Draft of a Report on the EDVAC: