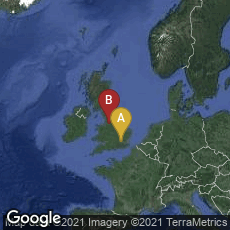 The dots in the dust jacket design depict the cathode ray tube memory of the Ferranti Mark I computer.

In 1953 English scientist and educationist Bertram V. Bowden edited Faster than Thought, the first widely read English book on electronic digital computing. Bowden, who for a time worked as a computer salesman for Ferranti Limited, and was later made a life peer as Baron Bowden, may probably be designated as the first electronic computer salesman. His book, which was probably originally intended as a sales tool, featured chapters on Charles Babbage and Ada Lovelace, and discussions of the Cambridge EDSAC, Turing's ACE, and, of course, early machines being developed at Manchester for Ferranti. Alan Turing authored Chapter 25, "Digital Computers Applied to Games." The distinctive dust jacket design was based on the cathode ray tube memory of the Ferranti Mark I computer.

Reflective of the relatively slow speed of advances in computing at this time, the book remained in print without change until 1968 even though by 1960 all the computers mentioned in the text were totally obsolete.