Texas Instruments 905 transistor, one of the first types sold commercially. 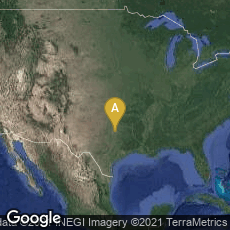 In 1954 Texas Instruments manufactured the first silicon transistor, the 900-905 series.

"Texas Instruments was the first company to offer silicon transistors commercially, announcing the 900 – 905 series of grown junction units in mid-year 1954. This was several years before other companies were able to produce commercial silicon units, and this early introduction allowed Texas Instruments to gain a large share of the highly profitable military transistor market – silicon units performed reliably at much higher temperatures than germanium units and were in great demand by the US military. The earliest TI silicon units ... are easily identified by the stamped id number (905, for example) on a crude unpainted metal case.  All TI units of this type (early and late) had a stamped outline of the state of Texas on the back of the case. The first units sold for over $100 each and the cost remained high for many years" (http://semiconductormuseum.com/PhotoGallery/PhotoGallery_TI_900_Series.htm, accessed 9-2020)