On September  14, 1956, at IBM's Glendale Laboratory in Endicott, New York, IBM demonstrated the 305 RAMAC (Random Access Method of Accounting and Control) Magnetic Drum Data Processing Machine. The machine used a series of IBM 355 disk memory units. Also in September 1956 the machine was demonstrated at the U.S. Atomic Energy Commission exhibit at the Atoms for Peace Conference in Geneva.

"The first hard disk unit was shipped September 13, 1956.[6] The additional components of the computer were a card punch, a central processing unit, a power supply unit, an operator's console/card reader unit, and a printer. There was also a manual inquiry station that allowed direct access to stored records. IBM touted the system as being able to store the equivalent of 64,000 punched cards.[5]

"The 305 was one of the last vacuum tube computers that IBM built. It weighed over a ton.[7]

"The IBM 350 disk system stored 5 million alphanumeric characters recorded as six data bits, one parity bit and one space bit for eight bits recorded per character.[8] It had fifty 24-inch-diameter (610 mm) disks. Two independent access arms moved up and down to select a disk, and in and out to select a recording track, all under servo control. Average time to locate a single record was 600 milliseconds. Several improved models were added in the 1950s. The IBM RAMAC 305 system with 350 disk storage leased for US$3,200 (equivalent to $29,130 in 2019) per month. 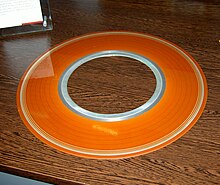 "The original 305 RAMAC computer system could be housed in a room of about 9 m (30 ft) by 15 m (50 ft); the 350 disk storage unit measured around 1.5 square metres (16 sq ft). Currie Munce, research vice president for Hitachi Global Storage Technologies (which has acquired IBM's hard disk drive business), stated in a Wall Street Journal interview[9] that the RAMAC unit weighed over a ton, had to be moved around with forklifts, and was delivered via large cargo airplanes. According to Munce, the storage capacity of the drive could have been increased beyond five megabytes, but IBM's marketing department at that time was against a larger capacity drive, because they did not know how to sell a product with more storage.

"The 350 disk memory unit was the first hard drive. It permitted random access to any of the million characters distributed over both sides of 50 two-foot-diameter disks. It stored about 2,000 bits of data per square inch and had a purchase price of about $10,000 per megabyte. (By 1997 the cost of storing a megabyte on a hard drive dropped to around ten cents.)" (Wikipedia article on IBM 305 RAMAC, accessed 8-2020).