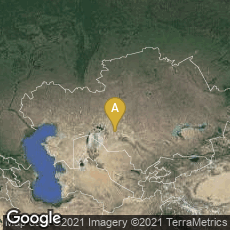 Replica of Sputnik 1 in the National Air and Space Museum

On October 4, 1957 the Soviet Union launched Sputnik, the first artificial earth satellite, during the International Geophysical Year from Site No.1/5, at the 5th Tyuratam range, in Kazakh SSR (now at the Baikonur Cosmodrome). Sputnik transmitted primitive communications back to earth, demonstrating the potential of satellites for telecommunication. Launching of Sputnik began the "Space Race" between the United States and the Soviet Union.