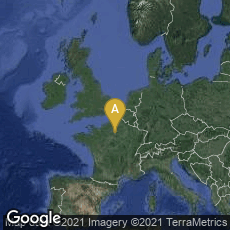 Roman de la Rose. Bibliothek der Kunstakademie Düsseldorf, A.B. 142. This is dated 14th century. f. 1r. No further information is provided by the Roman de la Rose Digital Library, from which this image was downloaded. The style is clearly French, and imagery is similar to BnF_fr_802_lr_Jeanne_de_Montbaston from the atelier Montbaston. 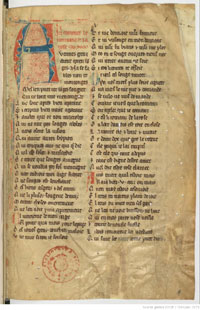 Around the year 1230 French scholar and poet Guillaume de Lorris wrote the first section (4058 lines) of Le Roman de la Rose (Romance of the Rose), a book-length poem in Old French, in which the narrator enters a dream world and falls in love with a Rose—an allegorical representation of a young woman. During his pursuit he instructs readers on the art of courtly love, with frequent bawdy comments and detours into alchemy and astronomy. Le Roman de la Rose became one of the best-sellers of the Middle Ages, of which at least 270 medieval manuscripts survive— many illuminated— from the 13th to 16th centuries. The earliest, dating close after the completion of the work, is in the Bibliothèque national de France (BnF fr. 1573).

The Roman de la Rose Digital Library, a joint project of the Sheridan Libraries at Johns Hopkins University and the Bibliothèque nationale, intended to make virtual copies of at least 150 of the extant manuscripts of this work available with page turner software.

de Lorris' ". . . part of the story is set in a walled garden or locus amoenus, one of the traditional topoi of epic and chivalric literature. In this walled garden, the interior represents romance, while the exterior stands for everyday life. It is unclear whether Lorris considered his version to be incomplete, but it was generally viewed as such.

"Around 1275, Jean de Meun composed an additional 17,724 lines. Jean's discussion of love is considered more philosophical and encyclopedic, but also more misogynistic and bawdy. The writer Denis de Rougemont felt that the first part of the poem portrayed Rose as an idealised figure, while the second part portrayed her as a more physical and sensual being " (Wikipedia article on Roman de la Rose, accessed 12-30-2008).

"The date of this second part is generally fixed between 1268 and 1285 by a reference in the poem to the death of Manfred and Conradin, executed in 1268 by order of Charles of Anjou (d. 1285) who is described as the present king of Sicily. M. F. Guillon (Jean Clopinel, 1903), however, considering the poem primarily as a political satire, places it in the last five years of the 13th century. Jean de Meun doubtless edited the work of his predecessor, Guillaume de Lorris, before using it as the starting-point of his own vast poem, running to 19,000 lines. The continuation of Jean de Meun is a satire on the monastic orders, on celibacy, on the nobility, the papal see, the excessive pretensions of royalty, and especially on women and marriage. Guillaume had been the servant of love, and the exponent of the laws of "courtoisie"; Jean de Meun added an "art of love," exposing with brutality the vices of women, their arts of deception, and the means by which men may outwit them. Jean de Meun embodied the mocking, sceptical spirit of the fabliaux. He did not share in current superstitions, he had no respect for established institutions, and he scorned the conventions of feudalism and romance. His poem shows in the highest degree, in spite of the looseness of its plan, the faculty of keen observation, of lucid reasoning and exposition, and it entitles him to be considered the greatest of French medieval poets. He handled the French language with an ease and precision unknown to his predecessors, and the length of his poem was no bar to its popularity in the 13th and 14th centuries. Part of its vogue was no doubt because the author, who had mastered practically all the scientific and literary knowledge of his contemporaries in France, had found room in his poem for a great amount of useful information and for numerous citations from classical authors" (Wikipedia article on Jean de Meun, accessed 12-29-2008).

"At least 270 manuscripts and manuscript fragments of the Roman de la Rose survive from the 13th, 14th, 15th, and 16th centuries. These works are kept mainly in European libraries, and most remain in France where the majority of these books were produced. Thirty Rose manuscripts are now in different repositories in the US, including the Walters Art Museum in Baltimore (Walters 143), the J. Paul Getty Museum in Los Angeles (Ludwig XV7) and the Morgan Library & Museum in New York (Morgan 948).

"There are also several Rose manuscripts in private collections, two of which are part of the Rose Digital Library (Cox Macro Rose and Ferrell Rose); two are now owned by Senshu University in Japan (Senshu 2 and Senshu 3) and can also be found on this site. One of the oldest surviving Rose texts is a manuscript now in the Bibliothèque nationale de France in Paris (BnF fr. 1573), made in the late 13th century, not long after Jean de Meun finished his section of the poem. Two early illustrated texts of the Rose are Paris, BnF, fr. 378 and Paris, BnF, fr. 1559. Both of these date from the late 13th century as well. The last illustrated Roman de la Rose manuscript is the Morgan Rose. With 107 miniatures, this late work was produced c. 1520, after the first printed editions of the Rose text had already come out, around the turn of the 16th century (Rosenwald 396 and Rosenwald 917).

"Many Rose manuscripts are illustrated, some with large cycles of miniatures, and lavishly painted with gold and colored pigments. Others are unillustrated and represent a less costly undertaking. In a number of these manuscripts spaces were left for illustrations that were never begun, possibly because the bookmakers ran out of time, or because the patron ran out of money" (Keefe, Manuscripts of the Rose Digital Library, accessed 12-30-2008).

The well-known novel and film by Umberto Eco, The Name of the Rose (1980), alludes to the literary tradition of Le Roman de la Rose.

The Name of the Rose :