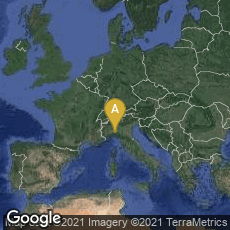 Saint Columbanus Founds the Monastery and Library at Bobbio

The Basilica of Saint Columbanus in Bobbio. 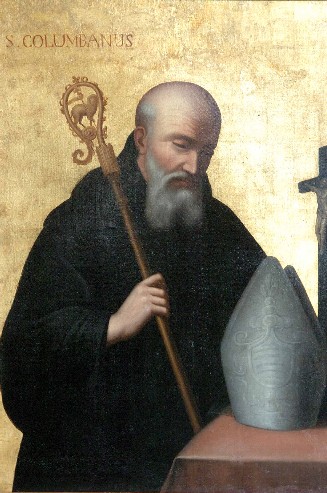 In 614 Saint Columbanus founded the Abbazia di San Colombano at Bobbio, in the province of Piacenza in the Emilia-Romagna region of Italy. Bobbio became famous as a center of resistance to Arianism, and the abbey library, founded by Columbanus with manuscripts that he brought from Ireland and treatises which he personally wrote, became one of the greatest libraries of the Middle Ages.

"Many books in its libary are older than the monastery and this demonstrates that Bobbio received many books second-hand. I refer especially to the copies of Cyprian, the biblical codex k of African origin, the Medici Virgil, the very ancient grammatical manuscripts, and especially, to the classical texts which lie buried in palimpsests" (Bischoff, Manuscripts and Libraries in the Age of Charlemagne [2007] 9).

In the ninth century Saint Dungal bequeathed his library to the abbey. It included some seventy volumes, among which was the famous 'Antiphonary of Bangor'.

In 982, Gerbert of Aurillac (later Pope Sylvester II) became abbot of Bobbio, and with the aid of numerous ancient treatises which he found there, composed his celebrated work on geometry. It appears that when Greek was almost unknown in western Europe, certain Irish monks at Bobbio read Aristotle and Demosthenes in the original Greek.

"A tenth-century catalogue, published by Muratori, shows that at that period every branch of knowledge, divine and human, was represented in this library. Many of the books have been lost, the rest have long since been dispersed and are still reckoned among the chief treasures of the later collections which possess them.

"In 1616 Cardinal Federico Borromeo took for the Ambrosian Library of Milan eighty-six volumes, including the famous "Bobbio Missal", written about 911, the Antiphonary of Bangor, and the palimpsests of Ulfilas' Gothic version of the Bible. Twenty-six volumes were given, in 1618, to Pope Paul V for the Vatican Library. Many others were sent to Turin, where, besides those in the Royal Archives, there were seventy-one in the University Library until the disastrous fire of 26 January 1904" (Wikipedia article on Bobbio Abbey, accessed 12-03-2008).

♦ Umberto Eco based the location of his 1980-83 novel The Name of the Rose, with its labyrinthine library, on the abbey at Bobbio.