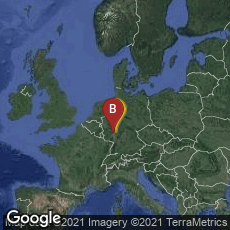 "The Name of the Rose", Probably the Best Book History and Library Film Set in the Middle Ages The Name of the Rose, a 1986 German-French-Italian film made in English based on the novel by Umberto Eco, was directed by Jean-Jacques Annaud, and starred Sean Connery and Christian Slater. Exterior sets were built outside of Rome; most interior scenes were filmed in Eberbach Abbey, Eltville am Rhein, Germany. Production was by Constantin Film, Frankfurt, Germany.

Though the film enjoyed good sales in Europe, it was a financial flop in the U.S where interest in medieval culture is more limited. In my opinion this film is an excellent adaptation of the novel even though the inevitable simplication of the story line was necessary. It may be the best book history and library film set in the Middle Ages. It was later issued on DVD and Blu-ray with a fascinating commentary by the director.