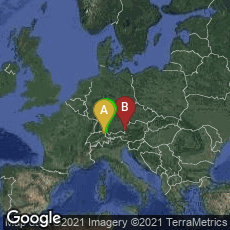 The Lindau Gospels, One of the Great Treasures of Early Carolingian Metalwork Lower cover of the Lindau Gospels, MS M1 in the Morgan Library & Museum. 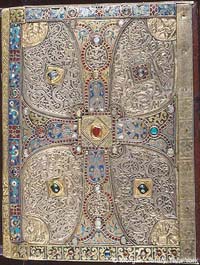 The gilt silver, enamel, and jeweled lower cover on the Lindau Gospels, MS M1 in the Morgan Library & Museum, was executed in Austria, possibly in Salzburg, during the second half of the 8th century.

"In 1899, Pierpont Morgan purchased the Lindau Gospels from the heirs of the 4th Earl of Ashburnham; it was the first major mediaeval manuscript to enter his collections. He acquired, in this single volume, three outstanding examples of Carolingian book art: an important ninth-century illuminated manuscript from the scriptorium of St. Gall, and two of the finest surviving Carolingian metalwork bookcovers. The two covers, however, may be separated by as much as a century, and it is certain that the older of the covers did not originally belong to this codex, however early it was assimilated to it. The covers and codex can be traced back as an entity no further than 1594, the date stamped on the red morocco spine of the volume. It has not been determined whether the jewelled covers were added to the codex then, or whether repairs were made at that date to an existing bound volume, already with jewelled covers. Nor has it been established where the volume was in 1594; the first explicit record placing it in the Benedictine nunnery of Lindau, from which it takes its name, comes in 1691. Lindau is on a small island in Lake Constance, just offshore near the northeast corner. St. Gall, where the Gospels was written, is southwest of Lindau, across the lake and inland, at a direct distance of about twenty miles."

"It has long been recognized that the lower cover of the Lindau Gospels is considerably earlier than the date of the manuscript, and could not have been designed for it. This cover is one of the great treasures of early Carolingian metalwork. It has elicited a considerable literature, characterized by widely varying opinions concerning its localization and date. Such a diversity of opinion is understandable, for although the cover was clearly designed as a unit, a variety of techniques and motifs make up its individual components. The basic layout consists of an enamelled cross (both champlevé and cloisonné) within an enamelled flrame, over four background silver-gilt panels of complex engraved animal interlace patterns. The cross-in-frame motif is similar to that of Queen Theodelinda's bookcovers, mentioned above, though an interval of as much as 200 years separate the two peices of work; and, on both, the arms of the cross broaden where they join the frame (cross pattée). The four cloisonné representations of the bust of Christ on the Lindau cover, one on each arm about the center of the cross, may be related to the late seventh-century gold Cross of Duke Gisulf, each arm of which contains two repoussé portrait heads, presumably Christ's.

"Many scholars have been struck by the resemblance of the animal interlaces on the quadrants to Hiberno-Saxon decorative schemes, and several have noted a general resemblance in layout to several of the carpet-pages in the Lindisfarne Gospels of ca. 700, on which a cross pattern is brought out against an animal-interlace background. An even more specific stylistic connection has been established for the animal interlaces in the two gilt silver engraved medallions laid into the vertical arms of the cross: these follow precisely the 'gripping-beast' pattern of Viking animal ornament. Their earliest appearance in Viking art is on objects from the Oseberg ship-find, which have been dated to between 800 and 850. It has sometimes been asserted that the Viking gripping-beast style was derived from Carolingian prototypes, but this cannot be documented—unless indeed the Lindau Gospels lower cover is considered as a precedent Carolingian example" (Needham, Twelve Centuries of Bookbindings 400-1600 [1979] 25-26).

The Morgan Library & Museum provides a digital facsimile of the Lindau Gospels at this link.