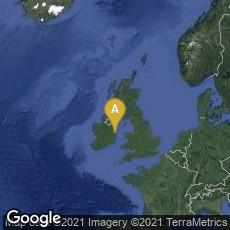 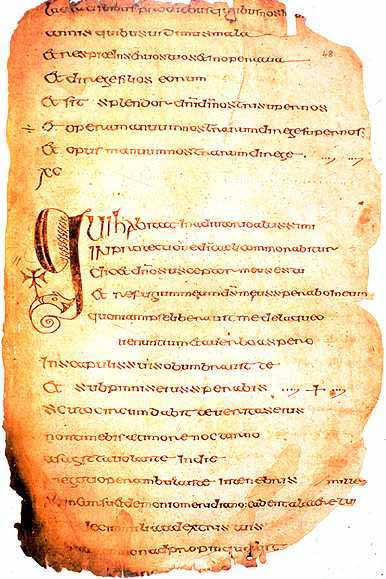 The Cathach of St. Columba (The Cathach/The Psalter of St. Columba) a late sixth century or early early seventh century Irish Psalter, of which 58 leaves of the original circa 110 leaves survive, was traditionally associated with the copy "made at night in haste by a miraculous light" by St. Columba of a Psalter loaned to him by St. Finnian. St. Finnian disputed Columba's right to keep the copy, and King Diarmait Mac Cerbhaill attempted to settle the dispute by making the judgment ‘To every cow belongs her calf, therefore to every book belongs its copy’. The arbitration failed and the Psalter of St Columba passed into the hands of the O'Donnells after the pitched battle of Cúl Dreimhne in 561, in which many men were killed. As penance for these deaths caused by the dispute over the copy, Columba suggested that he work as a missionary in Scotland to help convert as many people as had been killed in the batle. He also promised tomove from Ireland and never again to see his native Ireland. The Cathach is the oldest surviving manuscript written in Ireland and the second oldest surviving Latin Psalter. However scholars doubt that the manuscript was actually written by St. Columba.

"The Cathach is the first Insular book in which decoration begins to assume a significant role in articulating the text, with its decorated initials (their crosses and fish perhaps influenced by manuscripts associated with production in Rome under Pope Gregory the Great, combined with native Celtic ornament) and the diminuendo effect of the following letters linking them to the actual text script. Herein lie the origins of the magnificent full-page illuminated incipits of the Lindisfarne Gospels and the Book of Kells." (Michelle P. Brown, Preaching with the Pen: the Contribution of Insular Scribes to the Transmission of Sacred Text, from the 6th to 9th Centuries [2004]).

"An Cathach (meaning ‘the Battler’) was a very important relic used by the Clan Ó Domhnaill (O’Donnell Clan), the old Gaelic royal family in Tír Chonaill (mainly modern County Donegal) in the west of Ulster. It was used as a rallying cry and protector in battle. It was said to protect and guarantee victory in war to the Donegal leaders. Before a battle it was customary for a chosen monk/holy man (usually attached to the McGroarty clan, and someone who was sinless) to wear the Cathach in its cumdach around his neck and then walk three times around the troops of O’Donnell. It is the oldest surviving manuscript in Ireland, and the second oldest Latin psalter in the world. The name of the book derives from the Irish Gaelic word cath (pronounced KAH) meaning ‘battle’. An Cathach means ‘the battler’. The hereditary protectors/keepers of An Cathach were the Mag Robhartaigh/McGroarty clan from Ballintra in south Donegal. An Cathach, the Battler, has been dated to around the period 590 to 600 AD. The decoration throughout An Cathach is limited to the initial letters of each psalm. An Cathach is now housed in the Royal Irish Academy (entrusted to them in 1842).

"The manuscript was rediscovered in the cumdach in 1813, and given by its last hereditary keeper to the Royal Irish Academy in 1843. The leaves were stuck together until carefully separated at the British Museum in 1920; the manuscript was further restored in 1980-81.

"The specially made cumdach or book shrine is in the National Museum of Ireland. The initial work on the case was done between 1072 and 1098 at Kells, but a new main face was added in the 14th century with a large seated Christ in Majesty flanked by scenes of the Crucifixion and saints in gilt repoussé (NMI R2835, 25.1 cm wide).This was done by Cathbharr Ó Domhnaill, chief of the O'Donnells and Domhnall Mag Robhartaigh, the Abbot of Kells. The shrine cover consists of a brass box measuring 9 inches long, 8 inches wide and 2 inches thick. The top is heavily decorated with silver, crystals, pearls and other precious stones. It shows an image of the Crucifixion and an image of St Colm Cille " (Wikipedia article on Cathach of St. Columba, accessed 01-01-2012).

"The earliest recorded historical case-law on the right to copy comes from ancient Ireland. The Cathach is the oldest extant Irish manuscript of the Psalter and the earliest example of Irish writing. . . . It is traditionally ascribed to Saint Columba as the copy, made at night in haste by a miraculous light, of a Psalter lent to Columba by St. Finnian. A dispute arose about the ownership of the copy and King Diarmait Mac Cerbhaill gave the judgement 'to every cow belongs her calf, therefore to every book belongs its copy.' (Wikipedia article on History of Copyright Law, accessed 01-01-2012).