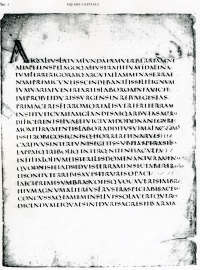 The Codex Augusteus of Virgil, or the Vergilius Augusteus, was once thought to have been created in the Age of Octavian, the first Roman Emperor, but was later estimated to have been written in the fourth century CE. This and the Codex Sangallensis, are the only surviving examples of ancient manuscripts written entirely in Square capitals, a style of writing that was extremely complex and time consuming, and most often reserved for display headings. The Codex Augusteus also contains the earliest surviving examples of large ornamented initial letters at the beginning of each page.

Square capitals were generally reserved for display purposes, or for use in monumental epigraphic inscriptions (scriptura monumentalis). "The angular letter-forms, with their frequent changes of angle and their serifs, were difficult to achieve with the reed pen (calamus) hence the preference for more rounded book scripts" (Brown, A Guide to Western Historical Scripts from Antiquity to 1600 [1990] no. 1 and plate 1).

"According to Lowe, the Codex was almost certainly written in Italy. The script is the creation of the broad pen whose edge is held parallel to the base line; the position of the arm for which, according to the cut of the pen, gives thick perpendiculars and thin sub-strokes. It is a position, also, that requires to be maintained by a constant effort of the will if the letters are to remain consistent throughout. Accordingly, when, as often, the o is tilted, it is probably against the intention of the scribe" (Morison, Politics and Script. . . . Barker ed. [1972] 49).

Only seven leaves of the manuscript survive, of which four are in the Vatican Library (Vat. Lat. 3256), and the remaining three in the Staatsbibliothek zu Berlin (Lat. fol. 416.) The manuscript was probably written in Italy. By the 15th century it was in St. Denis, Paris. The four leaves in the Vatican Library belonged to the jurist, humanist and bibliophile, Claude Dupuy. He gave two leaves to the humanist, historian and archaeologist Fulvio Orsini in 1574, and gave him the other two in 1575.

Stan Knight, Historical Scripts from Classical Times to the Renaissance (2009) B3 (pp. 26-27, with excellent images).

In July 2019 a complete digital facsimile of the 4 leaves in the Vatican Library was available digi.vatlib.it at this link.