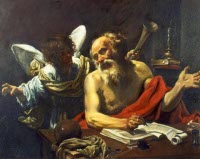 "The Christian tradition of 'treasure' bindings, covered with gold and silver, ivories, enamelwork, and gems, had its origin in late Antiquity and continued unbroken for a millennium. The earliest reference to such bindings in a Christian context is found in a letter of St. Jerome, dated 384, where he writes scornfully of the wealthy Christian women whose books are written in gold on purple vellum, and clothed with gems. It is noteworthy that he specifically associates jewelled bindings with purple codices, for a dozen or more such biblical manuscripts of the fifth and sixth centuries have survived. None is any longer in its first binding, but we have a clue here to the external treatment originally given to these luxurious volumes. . . ." (Needham, Twelve Centuries of Bookbindings 400-1600 [1979] 21).

The manuscript to which Bischoff refers is Codex Sangallensis 1395, the earliest surviving copy of the Vulgate gospels.